You are here: Home / Studying / The Power of Negative Thinking and the LSAT 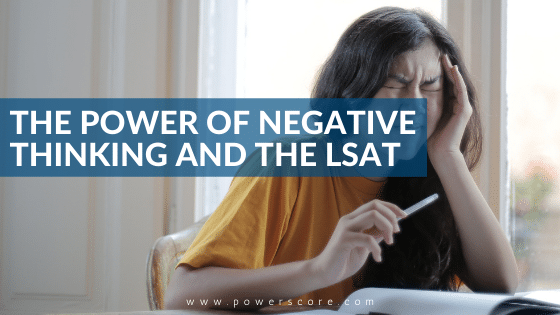 We’ve always told you to look at this test as an enjoyable event. So, what’s up with “negative thinking”?

Balance the Positive With the Negative

We always tell students to develop a positive mindset when it comes to the test. Cultivate the belief that success is guaranteed, and (virtually) anything is possible. Anything, indeed, including failure. True, there is much validity in the principle of so-called “self-fulfilling prophecy,” where your beliefs influence the actions you take, and the outcome depends – at least in part – on what you expect that outcome to be. None of this is under debate. Developing a positive mental outlook is critical to your success on the LSAT, and beyond. It is just as important, however, to balance the positive with the negative, optimism with pessimism. While you should always strive for success, you should also be open to failure. Here’s some anecdotal evidence as to why:

Last year, I had a student – let’s call him Charlie – who bombed the test big time. It caught us both by surprise, which – in retrospect – was part of the problem. Charlie’s practice test scores were consistently in the mid-170s, and he never imagined getting anything lower than that. He didn’t need to “visualize” attaining a specific goal – he saw the 180 clear as day.

On the day of the test, Charlie’s first section went horribly wrong: while rushing to set up a game, he misread a rule. Annoying, for sure, but not the end of the world (or so you may think). Unfortunately, Charlie didn’t see it that way: in his world, failure was not an option, and a mistake was tantamount to a full-blown calamity. He never visualized a worst-case scenario and had no idea how to cope with it. And so he “choked,” later admitting that the remainder of the section made absolutely no sense to him. He canceled his score on the spot.

What Charlie failed to do, among other things, is what the Stoics called “the premeditation of evils.” If you can imagine a worst-case scenario (e.g. bombing a section on the LSAT, getting coal for Christmas, etc.), you can develop a coping mechanism to deal with it. Telling yourself that you can get a 180 is great, but it is poor preparation for those times when you don’t. In this regard, the “premeditation of evil” is not unlike an insurance policy: it prepares you for times of uncertainty, failure, or self-doubt.

Studies now show that imagining a calamitous event actually reduces the anxiety associated with it. Charlie would have been just fine with a 172. In fact, the section he bombed turned out to be the experimental one, which resulted in repeated bouts of self-flagellation a few weeks later. Ironically enough, he could have attained a perfect score, if only he had prepared for a less stellar outcome.