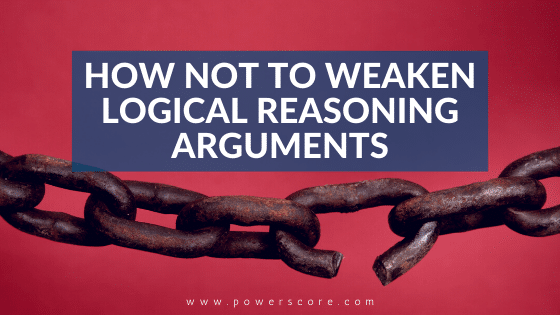 Here’s an example of a highly misleading strategy for attacking Logical Reasoning Arguments.

To weaken an argument, you must first find the central assumption of the argument and then attack it by using additional evidence that refutes that assumption.

Let’s Break It Down

Where to begin? Conceptually, this advice is quite deceptive. Not every argument contains exactly one “central assumption”. In fact, most arguments contain multiple assumptions. Some are warranted, others—not so much. Furthermore, if by the word “central” the authors are referring to selecting the most unwarranted of these assumptions, then this determination would be highly subjective and fraught with peril.

Also, notice that applying this strategy would be a two-step process.

This is laborious as well as misguided. Each step carries its own set of challenges (both conceptual and practical). First, the only way to “find” an assumption is to negate the statement you believe represents that assumption. If its logical opposite weakens the conclusion of the argument, then this is an assumption upon which the argument depends. In a way, you are required to turn a Weaken question into an Assumption question, and then back into a Weaken question. Ridiculous.

But it gets better! Even if you manage to identify a broad range of assumptions and choose the right one to attack, you still need to refute an unstated premise. This is inherently challenging because you are aiming at a moving target. The correct answer choice is supposed to refute not an explicit statement in the argument, but an implicit belief about an assumption that the argument may or may not have made. Just terrible.

How to Approach Weaken Questions

The key to weakening an LSAT argument is to attack the conclusion by showing that it fails to take into account an important element or possibility.

Essentially, you need to show that the conclusion does not necessarily follow from the premises. It’s as simple as that. Of course, answers that weaken the author’s argument will attack assumptions made by the author. All stimuli for weaken questions contain errors of assumption. However, prephrasing those assumptions first—and then attacking them—makes no conceptual sense and offers little strategic advantage.