You are here: Home / Studying / Practice and Over-Practicing for the LSAT 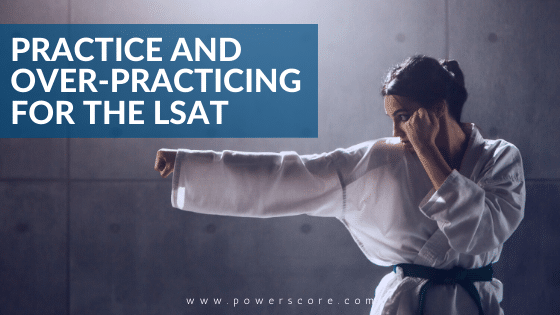 In a Time article on over-practicing, there are several good pieces of advice for LSAT test-takers. From that advice, we can draw some guidelines on how you should prepare for the LSAT. Let’s take a look at what they said and what it means for you.

The article references a study published by the Journal of Neuroscience. In this study, researchers observed subjects performing tasks repeatedly and measured energy expenditure as they completed tasks. At first, the subjects expended a lot of energy. Then, as they kept up the task, the energy expenditure kept dropping. This makes sense! They became more efficient as they repeated the task. What happened next however, is super interesting. The study involved a physical activity. As the muscular activity stabilized (meaning no less muscle energy was being expended), the subjects continued to expend less energy. Why? Their brains got more and more efficient. They would expend less and less energy.

As they kept practicing the task, even though there was no apparent improvement in how they were doing, their brains continued to become more economical. It resulted in more energy available over the long haul of the test. As the article notes, “The perfect execution of a piano sonata or a tennis serve doesn’t mark the end of practice; it signals that the crucial part of the session is just getting underway.” This is a salient point for LSAT takers. Even when no apparent progress is being made, keep on practicing! You’re ingraining the activity deeply into your neural pathways. Over time, this will make you more efficient, a better test-taker. Literally, your brain can go on auto-pilot during the test with no loss in performance. That’s an immense advantage and keeps you fresher and mentally more energetic as the test wears on.

So, once you start nailing full sections of Logical Reasoning or Logic Games, that’s not the time to stop. That’s the exact moment to keep on studying. You will continue to get better and better, even if you can’t see that happening physically. As the lead researcher states, “We have shown there is an advantage to continued practice beyond any visible changes in performance.” So study hard, and long too.