You are here: Home / Studying / Welcome to the LSAT Casino 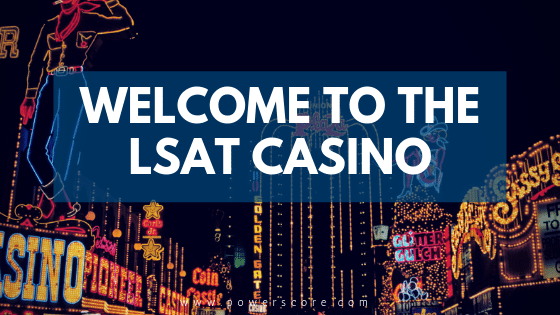 When talking about the LSAT, and particularly when examining test results, I like to analogize the LSAT to a casino. Yes, there is the chance that you can go into the test and lose your shirt score-wise. However, what I’m really referring to is the somewhat random nature of the questions you encounter on the LSAT and how that can dramatically affect test takers.

The Test is a Gamble

The LSAT is a standardized test. While that means certain elements are consistently tested, norming protocols are used, and the test is administered in a similar way each time, the exact content of the LSAT varies from test to test. Of course, every student already knows this. Once you’ve seen a question on the LSAT, you won’t see that question again. What is more important is how the emphasis on each concept changes from test to test.

This variance in concept testing isn’t limited to just Logical Reasoning, or conditional reasoning, of course. In Logic Games, some LSATs test Linear ideas more than Grouping, and on other LSATs that situation is reversed. While that may seem innocent enough, depending on your strengths and weaknesses it can have a significant impact on your final score. This is the essence of the LSAT casino. When you walk into an LSAT administration, you are placing your chips on the hope that the test will break right for you and play to your strengths. You can’t control that outcome any more than you can control a roulette wheel. But, as in a casino, some people come out big winners and others don’t.

But You Still Have Control

However, don’t take this to mean that the entire test is chance and you have no control over your results. The composition of each LSAT is out of your control. What is within your control is the strengths and weaknesses you have. You can fix and improve these. If you know you have a weakness in, say, Grouping games. To offset the casino effect, work as hard as possible on them in order to eliminate that weakness. The ultimate goal is to be a player who has no weaknesses. In other words, you need to be a gambler who is good at every game in the casino. Don’t feel confident finding and improving your weaknesses on your own? Consider hiring a tutor that can design a study plan that targets your weaknesses.

There is another benefit of understanding the LSAT casino concept. Examining your practice test scores and understanding why your scores move up or down from test to test is important. Some students take several practice tests in a short period and are stumped at why scores varied across tests. Sure, that sometimes occurs because you run into a difficult section or Logic Game. But it also occurs because the casino effect is in play. Some tests are simply better for you, resulting in a higher score. Others will unfortunately be worse… and we all know what that means.

In the end, when you see a slight score drop on a single test after you’ve been practicing for a while, take it in stride and realize that perhaps you were dealt a bad hand at the LSAT table. Regroup and work on the areas that troubled you. Hopefully when it comes time for the real thing, you will walk out a big winner.