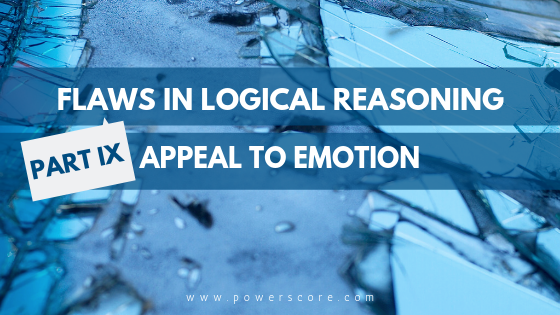 We’re at the final stretch! Before we can get to Part 9, here’s a recap on our purpose as stated in the first post on Source Arguments.

Last time we spoke about an Appeal Flaw. Here’s another one that you’ve, no doubt, been subjected to at some point in your life. In fact, you’ve probably attempted to utilize it as well.

How someone feels, how “unfair” some situation seems, or what one believes might be moral or immoral, does not typically provide weight for making an objective argument. In this type of error, a speaker uses emotion or emotionally-charged language to attempt to persuade a reader/listener that a position or belief is correct. Even though the emotion gives no tangible reasons (only emotional or ethically-based ones) to accept a conclusion.

“Professor, please reconsider my grade on the Final! I know I only answered 7% of the questions correctly, but I didn’t really deserve an F! In the past week I sprained my ankle, my dog ran away, and my kitchen caught on fire! I think it’s only fair I get a chance to retake the test!”

Granted, the student in this example has had a rough week. From a causal standpoint, it’s not hard to imagine that those events could have impacted test performance. But, is it accurate to say that they “didn’t deserve an F” after answering only 7% of the questions correct? This is a classic appeal to emotion. While we (and the professor) might sympathize with them, there’s no reason to accept that the score was undeserved.

How it Appears on the LSAT

A final point to consider regarding Appeal to Emotion errors: just because an author talks about the idea of emotion/feelings, or similarly the idea of morally right/wrong, regarding some course of action does not necessarily mean that that is the error. It’s only when the conclusion is based on the author’s feelings, or an attempt to persuade based on the feelings of someone else, that this error occurs. So don’t just automatically choose an answer about “uses emotions to persuade” or “bases a conclusion on moral concerns rather than…” because the author uses the words “moral,” “feeling,” “emotion,” “ethical,” etc. Instead, determine whether emotions/morals are the main basis for the argument, and select that type of answer only when they are.