You are here: Home / LSAT Prep / Accommodations for the LSAT Part III: The Facts 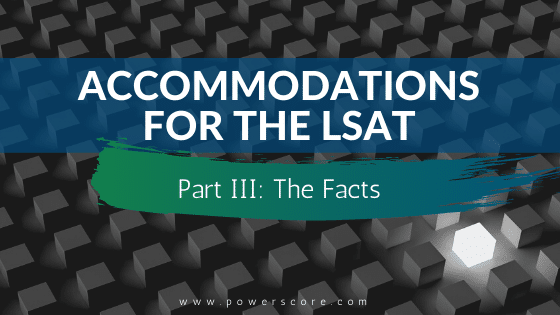 Now that we’ve discussed the accommodations available and the process for gaining those accommodations, let’s look at some of the facts surrounding the accommodation process. Facts reported and statements made here are based on LSAT Technical Reports, primarily this one. Let’s present the info in a series of questions and answers:

Q: How many people apply for LSAT accommodations?

Q: How successful are their requests?

A: LSAC grants about 46-79% requests each year. So, think about that for a moment: if you go through the process of requesting accommodations (which is lengthy), you have roughly a 50-75% chance on receiving those accommodations.

A: The Attention Deficit/Hyperactivity Disorder classification is the most approved accommodations in recent years.

Q: What LSAT accommodation is the most common?

A: Extra LSAT testing time is the most frequently granted accommodation. Next, extra rest time (break between sections) is the second most commonly granted request.

Q: How much extra time is available?

A: Time-and-a-half is the most frequently granted timing accommodation, with over 50% of the approvals being in this category (as of 2012). Additionally, double time is also common.

Q: Can I get more than double time to take the LSAT?

Q: So, does the extra time help?

A: It seems to help quite a bit! First, from observations, the extra time allows students to fully complete each section. Second, according to LSAC, test takers “who switched from standard to Accommodated/Extra Time testing conditions exhibited very high score gains on average.” The score gains reported in a 2012 study were 7.57 points.

So, now you know a bit more about the accommodations granted, the process, and the some of the facts surrounding the process. In the next part of our series, we’ll discuss some of the controversies that have swirled around LSAC as they administer this program.