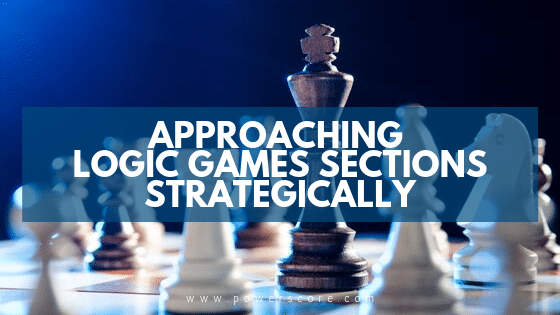 There is a fundamental truth about test takers when it comes to the LSAT: everyone is different. That is, everyone who sits down with this exam will have unique strengths and weaknesses, likes and dislikes, and ultimately, ways they can optimize their performance in every section. While that certainly affects how it is that people prepare, I think it also dictates how test takers should behave during the actual test. In this three-part blog series, we will look at each of the section types on the LSAT and consider exactly how an informed test taker should attack each type. Let’s kick off part one with Logic Games.

Before we start, here are a few facts about the Games section.

To highlight the last fact: you will find that certain games are either inherently easier or more difficult for some feature(s) that they contain. That feature may be the general mildness of a Basic Linear game that is Defined and Balanced! The number of variables to be ordered is specified and matches the number of spaces to be filled. Or, it might be a more challenging scenario of a Grouping game that is Partially Defined or Undefined. Perhaps still, it’s Unbalanced, where the variable sets are not consistent in terms of size.

You will have particular strengths and weaknesses. There will be games you tend to perform more strongly or poorly. This is usually identifiable because they are consistent and fairly predictable, which suggests that “difficulty” is, in part, subjective.

How to Approach Logic Games

So what do these “truths” about Logic Games tell us in terms of how to approach the section? The most crucial point is that you should not necessarily do the games in the order they are given! Now you have the knowledge that you are going to see several different game types in a somewhat random order. Couple that with your understanding of what games tend to be hardest means. On test day, when you get to a LG section, quickly scan the four games. Then, determine the order that is most preferable for you. Don’t just dive into Game 1 and start working through it, at least not until you look at Games 2-4 and decide that the first game is likely to be the easiest for you.

If you see a game that looks straightforward or representative of a scenario you are successful with, why not start there? If you begin reading a game scenario that is confusing or wholly unfamiliar, save it for the end. For example, say you recognize Game 2 to be an Advanced Linear game. You know those games tend to give you trouble more frequently than the other common types. In that case, save it! Similarly, if you have a type you strongly prefer, consider starting with it! Quickly scanning for a game that fits your preference and beginning with it is the advisable route to take.

It allows you to potentially begin the section with a successful, rewarding experience that establishes confidence and momentum. It also ensures that your time in the section is spent where it will confer the greatest benefit: on the games where your odds of a strong performance are highest.

Finally, there are a couple of additional points to consider as we wrap up this discussion.

In Part 2 of this series, we examine Reading Comprehension and the elements therein. We look at exactly how an adaptive approach to the passages is unquestionably the most effective strategy.

Happy New Year! What are your goals for this year?