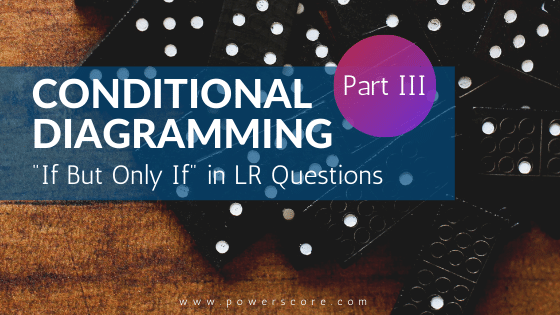 An interesting topic came up on our forum a short time back, about the meaning of “If but only if,” and the proper way to diagram a rule that includes this phrase.  Students who are familiar with the LSAT have probably encountered a rule that says “if and only if,” but the use of the term “but” is a clever trick by the test makers. “If but only if” doesn’t look quite the same as “If and only if,” and to many students, the two phrases appear to call for different diagrams. The reality, however, is that operationally the change makes no difference at all: Each of these phrases represents two rules (the same two rules) simply joined by different conjunctions.

Whether the phrase uses the word “and” or the word “but,” the following two rules are expressed:

These two rules can be concisely expressed together with a double arrow:

As discussed in the PowerScore LSAT Logical Reasoning Bible, the contrapositives of the two statements above are as follows:

Again, the two contrapositives can be expressed more concisely with a double arrow:

In the end, this rule tells us that either both A and B will be at the party, or neither one will be there.

P.S. If a future LSAT game happens to include the rule “C will attend if, yet only if, D attends,” don’t be thrown off!  Recognize this as just another clever rephrasing of the very same rule.