You are here: Home / LSAT Prep / A Qualitative Analysis: How Measurements of Quantity Affect the LSAT 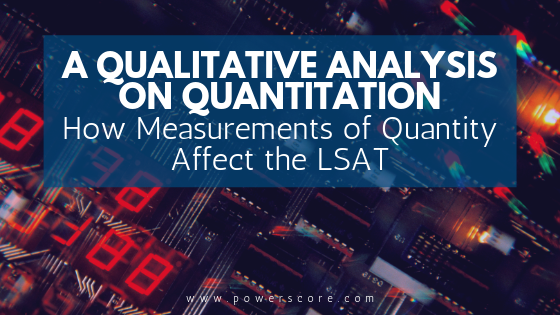 “Thanks for teaching me the definition of many….it really means a lot.”

Dad Jokes aside, knowing the exact definition of quantified terms like many can be crucial in mastering the LSAT. Quantification is an integral element in the discussion of logical force. This concept is of the utmost importance in understanding the power of language. Speaking with high levels of logical force doesn’t imply that you hold any special title, nor does it apply when you’re using whatever is the opposite of your inside voice. Rather, logical force refers to the power of your words and how much evidence would be required to prove them.

I often ask my students, “what is a smart person more likely to use, strong or weak language?” This usually gets a random selection of both responses, but then I specify the question. I would define a smart person as someone who is wrong as little as possible. What do you think is easier to be wrong about? The Cleveland Browns will win most of their games next year? Or, that the Browns will win some of their games next year? Don’t me wrong, I am all aboard the Baker Mayfield hype train. But, let’s not forget that the Browns won just one game in two whole seasons! Call me a cynic, but I would have major hesitation in guaranteeing that this year’s team can end up back over .500 for the first time since 2007.

One of the major challenges on the LSAT is understanding the intricacies of logical force. This also offers an advantage, one that can stay with you long after you select your final answer choice. By mastering quantification, you will be exceedingly less likely to speak in a way where you can be proven wrong. Based on my earlier definition, that is one way to sound a hell of a lot smarter!

Quantification on the LSAT is mostly defined by three core levels of required proof: 100%, >50%, and >0%. Let’s first break down a large number of words that fit within each level. Then, we’ll expand upon the relative risk of using these quantifiers in various situations across the exam. This list is not the exclusive set of all quantifying terms used on the exam. However, it does capture a good sample of words to look out for. Feel free to add any other quantified terms you can think of into the comments!

The following require knowledge of 100% of the population in order to be justified:

To validate any of the above claims, we require proof that they are in fact true 100% of the time. If even one golden retriever was not in fact a good dog, then my statement would be a lie. So, using this highest level of logical force can be quite risky, especially if you had even the smallest doubt that you couldn’t accurately speak to 100% of the given group.

In the cases of no and never, they too involve the strongest level of quantified logical force. Take the claim, no sumo wrestlers would look good in skinny jeans. Here we are essentially saying that 100% of them would not look good in extra tight pants.

Takeaway point: it’s best to avoid using strong quantified language unless you are absolutely sure you can back up your claims to the 100% needed to verify these strong statements.

The following require knowledge of at least half of the population in order to be justified.

Though these mid-range quantifiers have a minimum threshold for verification, they have no upward limit. Truthfully claiming that most of the Real Housewives have had plastic surgery simply needs us to know that at least half of them have gone under the knife. We would still be correct if 100% of them have had plastic surgery. On the off chance that this face is natural, it is safer to claim only that most have undergone surgery.

Takeaway point: The use of the mid-range quantifiers are safer than the strong level. Though they have no upward limit, at least 50% is still necessary in order to use these terms truthfully.

The following require knowledge of any amount of the population in order to be justified.

These statements imply that something is possible or that it happens to at least one percent of each given population. This presents a low bar to clear and it’s easy to prove the statements. In that sense, we can use them with high confidence.

However, here we find some quantifiers that may surprise you. The word many, for example, commonly confounds students on the LSAT. Conflating many and most is a very easy mistake to make, but it is a mistake nonetheless. Many may seem to imply a number larger than one, and though this is technically true, keep in mind that it still does not guarantee a majority. For example, we know that many of the United States have a coastline on the Atlantic Ocean. That certainly doesn’t allow us to prove that most of the United States touches the Atlantic.

On a direct scale I would say that many implies a number slightly higher than some. On the LSAT, though, they safely occupy the same category. In that sense, they prove that something exists in an amount greater than zero, but not necessarily in the majority. The same goes for a significant number, which is regulated by context more than a precise quantified level. If four students in my class of 20 were secretly European royalty, I would absolutely call that a significant number. Clearly, 4 out of 20 is far from enough to prove a majority.

Takeaway point: These weak quantifiers require the least amount of information to verify, so therefore, become to safest to use. Just like the mid-range level, these words require only a minimum threshold to establish truth, but have no upward limitation. So, even if were to rain on all 365 days of the year, it would still be accurate to claim that in rains in Seattle on at least some days of the year.

For both Must Be True and Most Strongly Supported questions, it’s extremely common for answer choices to be incorrect due to the presence of overly high quantified indicators. The weaker the logical force presented in the answer, the easier it is to support and/or prove.  Therefore the more likely it is to be correct.

The correct answer to an Assumption question doesn’t need to prove or even bring in high levels of support for an argument’s conclusion. It is simply to provide what’s necessary for the conclusion to be valid. For that reason, the correct responses often contain weak quantified language. To survive a month-long solo camping trip, I don’t need to assume that I have gourmet offerings at every meal. I simply need to know that I have some food during the trip.

*Note that this applies to the Supporter style of Assumption answers. The Defender style answers are likely to be much stronger. For example, to survive that camping trip it is necessary to assume that I am NOT brutally torn apart by a sasquatch.

For both Strengthen and Weaken questions, your job is to bring in an established fact and change the argument as much as possible. Whether it be for better or for worse. This means that the stronger the quantified logical force in the answer choice, the more we would be able to affect the conclusion in the stimulus.

More than any other question type, the Justify answers are extremely likely to contain the strongest possible quantifiers. There, our job is not just to support the conclusion but to bring in an assumption that is sufficient to prove that conclusion. We must be wary of answers that bring in lowered levels of logical force. In turn, we should focus especially on the strong quantified indicator words.

The LSAT will use vocabulary that we encounter in everyday life. However, especially with quantity terminology, the way it uses them can vastly vary from what we’re familiar with. Studying in advance of taking an LSAT gives you the advantage; if you familiarize yourself with the LSAT’s quirks, you can respond accordingly when you encounter them on the test. Want to dive deeper into quantity terminology? Check out Dave Killoran’s post on the subject.