You are here: Home / SAT Prep / Is Your GPA or SAT Score More Important? 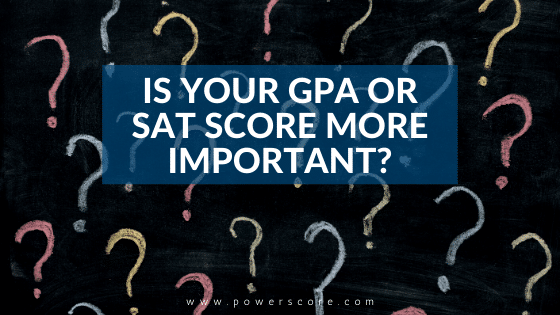 In the battle between SAT scores and GPA, many students wonder which matters most to your college application. Though many college admissions departments say your GPA delivers the biggest punch, these same admissions officers are secretly showing scorecards that declare the SAT the winner of the match. So why the secrecy and denial surrounding the importance of the SAT?

Where the Data Comes From

Let’s take a moment to think about how the two sets of data are computed. You cultivate your GPA over four years and measures effort, focus, and diligence. On the other hand, you acquire your SAT score in a matter of hours and is generally believed to reflect your aptitude. Universities may appear “shallow” if they reveal that they give more weight to a four-hour test than the four-year cultivation that is your GPA. It’s a lot like someone who says the only thing that is important in dating is personality, but then only dates supermodels.

Sometimes we say things that aren’t fully true in order to avoid public censure. College admissions departments are no different. But, we now know that test scores are the heavyweight champs. How do we know that they’re the most important component of college application? You have former admissions officers that have come forward to reveal the secret formula to thank.

Why is Your SAT Score More Important?

There are several reasons that the SAT is a more valuable admissions tool than your GPA. Most obviously, it’s because the SAT is a standardized test. While your GPA compares you to the rest of your school, the SAT compares you to the rest of the country. GPAs are not standard. An “A” in an English class in New York City can equate to a “C” in another English class in San Diego.

In addition, some schools are guilty of inflating the grades of its students. Because multiple schools compete for the same students, it’s in the best interest of the school to produce a senior class with an outstanding GPA average. A school that has a graduating senior class average a 3.9 GPA appears more appealing than one with a 3.6 GPA average. Another skewing factor can be counselors leaving class rankings off of a transcript. This can further inflate a GPA to make it look like a stellar measure of their students when it’s closer to slightly above average.

Are Colleges to Blame?

You can start to see why a college admissions officer has a hard time putting a lot of faith into a GPA that school employees generate! But while these admissions officers may be afraid to trust some principals, counselors, and teachers, they can certainly trust an SAT score. This is because it’s standardized by a third party, the College Board, and it fairly compares Jane in Florida to John in Oregon. It can also provide additional, unbiased information about a student’s transcript or recommendations.

Say Tina gets an “A” in geometry and has a glowing recommendation from her math teacher. On her SAT’s Math Section, she gets a 460, which is well below average. An admissions officer can infer that Tina’s grade is an inflation and her math teach is an unreliable source. As much as the SAT may seem like an unfair assessment to you, it’s the only fair tool for admissions officers to compare students from different schools and educational backgrounds across the country.

College admissions boards respect the SAT for its indication of aptitude. Most admissions officers are intellectuals themselves, and they tend to value intellect in their applicants. For this, they are more likely to dismiss less than desirable grades when accompanied by a high SAT score. For example, Clive gets a 2020 on his SAT and has a GPA of 2.5. An admissions officer may conclude that Clive is obviously quite bright but might not have been challenged by his high school teachers. Therefore, he’s likely to shine when he is properly engaged by the professors at their prestigious university. In contrast, if Paul turns in an application with a 1430 SAT and a 4.0 GPA, that same officer is likely to be suspicious of his transcript and doubt his ability to keep up with the intellectual level of college courses.

To put it simply, colleges want students with high SAT scores. Officials want to boost the average SAT score of the incoming class so they appear more selective than competing schools. X University wants nothing more than to advertise that their freshman class has an average SAT score of 1820 which is 100 points higher than Z College across town. A higher selectivity ranking attracts better applicants and more funding. Like all business, colleges are constantly competing for clients and market share.

Though your SAT score is King, keep in mind that your GPA is not worthless! While the SAT might have won the match, GPA manages to steal several rounds. It is the only numerical data that can reveal hard work, self-discipline, and consistency. Together with your transcript, your GPA can show improvement over time and intellectual growth. These qualities are valuable when you are being compared to another student with a similar SAT score but lesser GPA. It is still important to take rigorous classes and earn good grades to bolster your transcript and GPA.

Despite what you might hear, your standardized test scores are the most important components of the college admissions process. If you want to be the applicant with the knockout punch, you must submit the best SAT score possible.