You are here: Home / College Admissions / 3 Reasons to Start Your College Applications Now! 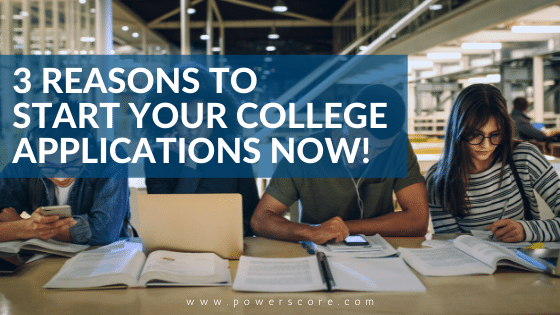 In a lot of ways, applying to college is like going to the dentist. It’s something you know you should do and you know is good for you! But it’s also something you really, really aren’t looking forward to. Which is why many high school seniors put off college applications until the last minute. Some even leaving the task to the week before applications are due. And just as putting off the dentist can result in a very painful toothache, dragging your feet on your college applications can culminate in a very painful headache. Here are three reasons why rising seniors should start their applications now.

Some colleges use rolling admissions. What does that mean? Admissions officers read applications as they “roll in” and render admissions decisions constantly. This is great news for students who get on the ball early on and submit their applications months ahead of the deadline. Why? Because you’re competing for a much larger number of available spots in a class with a much smaller number of people. However, if you’re the kind of person who leaves your applications to the last minute, the opposite is true: You’ll be competing against a much larger number of people (because, after all, most of us are major procrastinators and the majority of us will leave our college applications until the last minute) for a much smaller number of spots (because the early birds already snagged a nice, large chunk of them back in October and November, when they submitted their applications).

Moral of the story? Give yourself an edge and use rolling admissions to your advantage. Apply early, compete with fewer people, have a greater chance of getting in.

You may think that writing a single letter shouldn’t take weeks or months, but what about when your recommender is writing dozens of letters? The people you are asking to write your letters of recommendation are probably the same people that many of your classmates are seeking out to write their letters.  If you start your applications early, this won’t be a problem–you can ask your teachers for a letter right at the start of senior year and you’ll be at the front of the list. Wait until after Thanksgiving or–ack!–right before Winter Break, and you’ll find yourself at the tail end of a very long list of students, all asking for a letter or letters.

What’s the takeaway? Be nice to your teachers–ask them for letters long before your deadline. This will benefit your application and your relationship with your recommender!

Your transcripts can get lost on the way to a school. Someone’s computer may crash with your recommendation in it. Your computer could crash with all of your application essays in it. When you take the ACT or SAT, you’ll end up sitting next to someone who cries the whole way through it, which will kill your concentration and end up giving you a terrible score (which means you’ll have to retake the test). Trust me–college application time is a magnet for unexpected problems and delays. </>

Point being, if you start your apps late, you’re giving yourself no time to fix these unexpected roadblocks. If you start early, then they’re just minor speed bumps that you can easily fix with a phone call or email.

The Time is Now

The ideal time to start your college applications is now! This gives you plenty of time to put everything together, lets you take your time with all aspects of the process, and reduces stress for you, your family, and your teachers. The sooner you complete your applications, the sooner they are out of the way. Just like getting that cavity filled–it won’t be pleasant but, boy, you’ll be glad you did it once it’s done.