You are here: Home / ACT Prep / A Growth Mindset can Boost your SAT and ACT Scores 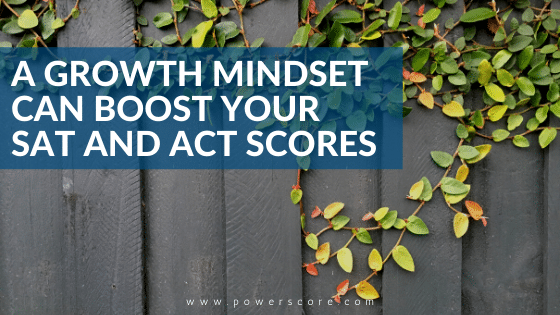 There are two ways to see a test.

We’re not just talking about the SAT or ACT. How do you approach baseball tryouts? Are they all about natural ability and athleticism? Or should you work hard beforehand to improve your fastball and your batting average? You can apply the same logic to almost any challenge: auditions for the school play, a difficult class, your driver’s test.

The first approach reflects what’s called a fixed mindset: the assumption that intelligence, test-taking ability, and other personal traits (like athleticism or creativity) are fixed at birth. Some people are brilliant writers; others aren’t. Some people are gifted musicians; some aren’t. If a certain task doesn’t come naturally, it’s better to give up, rather than waste time trying to improve. We’re all familiar with this way of seeing the world. If you’ve ever said something like: “I’ll never do well on the math section. My brain just isn’t built for numbers” or “Of course she aced the test! She’s brilliant!” then you probably have a fixed mindset.

The second approach reflects an entirely different way of thinking about talents and abilities. With this mindset (the “growth mindset”), the assumption is that hard work and practice are the most important factors determining success. No one can succeed without effort, no matter how innately talented. Similarly, even the most tone-deaf singers and clumsiest pitchers can improve over time. With this mindset, tests, auditions, and try-outs are no longer terrifying. If you score badly on the SAT or ACT the first time you take it, it doesn’t mean that you’re stupid. It just means you haven’t studied enough yet.

Now sure, a growth mindset sounds nice! But surely it wouldn’t work in the real world. Applying to college, auditions, tryouts: these are all competitive processes. “Hard work” and “improvement” aren’t going to be enough for an admissions officer, right? Wrong. It turns out that most extremely successful people such as CEOs, politicians, musicians, etc., have growth mindsets. Growth mindsets make it easier to tackle challenges and move on from failure. What’s more, experiments have shown that elementary school kids who are taught to use a growth mindset tend to score better on tests. With a growth mindset, you’ll be more likely to study hard and less likely to be discouraged by minor setbacks.

Remember: it’s about hard work and improvement, not innate intelligence. Changing your attitude could be the key to changing your score on the SAT and ACT.