You are here: Home / SAT Prep / Who vs. Whom: Fun with Pronouns 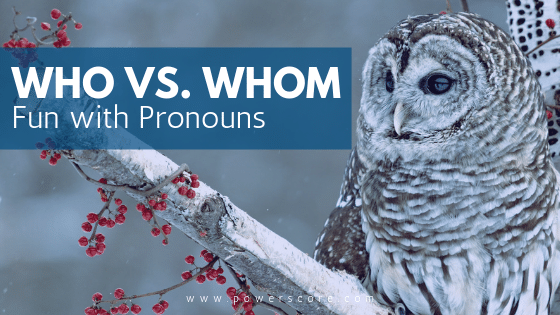 One of the concepts the ACT and SAT will test is your knowledge of sentence structure and grammatical rules. This includes everything from subject and verb agreement to prepositions and adverbs. Knowing your way around these sentence parts can mean the difference between getting a hard question correct in a few seconds and spending a long time figuring out an easy question only to get it wrong in the end. Some of the hardest to distinguish are the different usages of “me” and “I,” and “who” and “whom.” Today, we’ll tackle the latter of the two.

One of my favorite tools is the “who” and “whom” differentiator. Most of my students (and a lot of adults I know) have a hard time deciphering which of these pronouns to use in a sentence.

I looked around the room, wondering to (who/whom) the notebook belonged.

Do know which one to use just by looking at the sentence? Most people don’t know and can’t figure it out quickly. The answer, as it turns out, is “whom.” I was able to figure that out in approximately two seconds and the tip I used is so easy, it’s almost hard to believe it.

When you’re stuck trying to figure out which to use, you’ll practice a simple substitution. Instead of “who,” use “he.” And, instead of “whom,” use “him.” Sometimes you may have to reconfigure the sentence slightly, but once you get the hang of this easy trick, you’ll be able to do it in your head in a few seconds and get the right answer every time.

How to Easily Distinguish Between “Who” and “Whom”

In this case, “him” is the one that sounds the best. And, since we know that we’re substituting “him” in place of “whom,” we also know that we’ll use “whom” for our original sentence, which will now read:

I looked around the room, wondering to whom the notebook belonged.

This method can definitely feel long and drawn out in the beginning, but it quickly gets faster–and it also has the benefit of guaranteeing you a correct answer! Try a few others:

The surgeon, (who/whom) was working back-to-back shifts, had to drink coffee to stay awake.

Now try another one:

The pilot, (who/whom) we are glad to have on staff, has over 25 years of flying experience.

Practice makes perfect with this kind of tool. The more you repeat the trick, the easier and faster you’ll get. Grammar can be boring, but with tools like this one, it can be easy to overcome even the most difficult questions.