You are here: Home / LSAT Prep / Why Does It Take So Long for Digital LSAT Scores to Come Out? 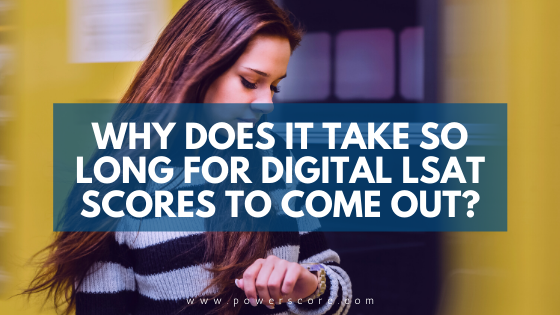 Once the LSAT is over, one of the most common complaints is that scores should come out more quickly. Given that we live in an era where tests are taken electronically, it sounds like a reasonable complaint. So, why does it take so long for LSAT scores to appear? Couldn’t they get them out a lot earlier? To best understand what happens once you finish the LSAT, let’s take a look at each phase of the process.

The first and most substantial delay actually comes before most students take the LSAT. Typically, we think of the LSAT as being given on a single day. However, that’s not the case when the exams are considered collectively. Sure, the domestic US and Canadian LSATs are administered on the same day, but there are also other administrations of the same test:

Out of the starting gate, the exams are often spaced out over a week. Although some of these exams are different forms, LSAC has exams all over the place and so the delays can be significant. Just a week of delays are already built into the process if you are counting from the “main” administration date.

Then, when problems occur (looking at you, November 2019 LSAT!), there can be LSATs still being administered up to 17 days later. Thus, a big portion of the score release delay is to allow LSAC to administer all these different exams AND to account for problems. Because they can’t release scores until everyone has taken the exam, this big cushion they have won’t go away any time soon.

Typical Delay = Between 7 and 17 days

Once they have the majority of the results in their system (usually on the main test day), LSAC begins examining the data and making sure the test results are as expected. This is a key phase of the process because they are attempting to make sure each individual question is valid. They also make sure that the test as a whole passes integrity checks. This process includes re-examining the integrity of each question and each section and looking for patterns of cheating. Then, they collectively look at any outlier results and make necessary scale adjustments. If there is nothing unusual, this process probably takes an afternoon. If there are red flags, again you could be looking at a few more days of delays.

During every LSAT administration, there are some student problems, as opposed to problems with the actual test content. Those can range from test-takers creating a disturbance, to a stolen tablet, to simple identification issues, to outright cheating. Some of these issues will cause the disallowance of an LSAT score or a delay until they resolve the problem. While all of these other steps are occurring, the Test Security team works to resolve all these issues. While this shouldn’t, in most cases, cause a further delay of the score release, it’s something that requires manpower and takes time. Thus, it’s just one more moving part of getting your scores back.

Last, they double-check everything and dump it into the huge system that powers LSAC and student databases such as CAS. In this phase they make sure every single aspect of the test is squared away:

Typical Delay = Up to 1 day

In the meantime, if you’re currently waiting for your score to come back, check out this blog to figure out what to do in the meantime.

Happy Valentine's Day! Is the LSAT your Valentine

Are you familiar with the digital LSAT's RC tools?

The February LSAT is just under 2 weeks away, keep