You are here: Home / Logic Games / When to Move to the Questions in LSAT Logic Games 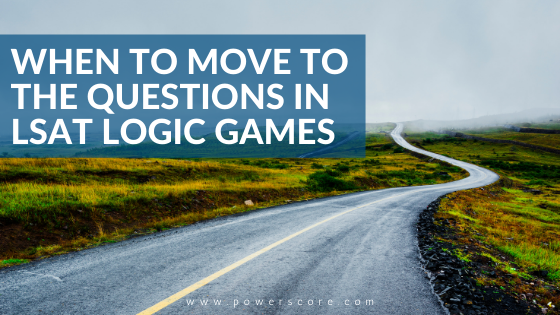 I’ve written two posts on Logic Games recently, both in response to student questions, and this week I’d like to address a third question about games I was asked recently:

How do you know when to move from your setup to the questions?

I should start by saying that it’s a very contextual decision. Some games (especially in recent years) have few inferences that can be made and you’ll often feel as though you’ve discovered little in your initial setup. This is an unnerving situation to look down and see a near-empty diagram. Other games may yield a lot of great inferences and it’s worth your time to quickly note them early on. So unfortunately there’s not a universal time limit or inference count that can be reliably used to make the transition from diagram to questions.

That in mind, when setting up games I do still tend to rely on two principles to alert me it’s time to move to the questions:

1. When my inference making starts to lag, that’s usually a sign that I’ve either made all of the major deductions and few if any still exist, or that, if something else key does exist, I’m probably not going to spot it until a question tips me off. I’m happy to report that with time and practice it’s rare that any major inferences will get overlooked at the outset. What I can’t afford to do is waste precious minutes hunting for more inferences that might not be there. So when they lag, I move on.

I’ve used an admittedly strained analogy for this before, where I compared it to making microwave popcorn. How can you tell it’s time to pull the bag out? You listen for the pops and when they start getting farther and farther apart you know you need to kill the cooking before your snack gets burned. Same with inferences. When you begin to see large time gaps between inferences, or you feel like you’re just staring at the setup hoping to see something but not, it’s time to move to the questions.

Incomplete Setups Can Be Enough

2. You can totally survive with a slightly incomplete setup. This may seem like an odd statement, but I assure you it’s true. You needn’t have found every single inference before moving to the questions to attack the questions successfully! Imagine that you’re setting up a game and reach the end of the rapid-fire, readily-seen deductions I reference above, but aren’t wholly confident you’ve found them all. So you spend another 60, 90, 120 seconds playing with hypotheticals or testing possibilities to see if there’s more to discover. Maybe you find something! That’s great, but was it worth the time spent? Probably not, since it’s extremely likely a question would have tipped you off to it naturally as you kept working. Or, also probable, that it wouldn’t have been tested at all, in which case who cares?

The truth is, if there are still a few general truths to be found the questions themselves should alert you to them. You can then amend your setup accordingly as you go. And what about the case when you spend that extra time up front and find nothing, no additional inferences? Then all you’ve accomplished is forfeiting time, a major LSAT sin. Either way, new deductions or not, the time it took to find them (or not) simply isn’t worth the potential payoff, assuming there even is one. Your risk dwarfs your reward. Let the questions fill in any blanks that might exist on a level where you’re struggling to find them on your own.

To echo this point, what IS a killer in games, aside from that wasted time situation I just described, is the inclusion of something that’s NOT true. Watch out for inferences that are actually less certain than you’ve shown them to be. You can sail breezily through a game even if your setup lacks a few minor deductions, but you’re in serious trouble if your setup lists deductions that are incorrect or exaggerated. So make your focus on showing only those things that are absolutely true, and moving confidently to the questions as soon as you feel your inference making begin to lag, letting the questions themselves fill in any knowledge gaps that might still exist.

Finally, I discussed some important points about inference making in a blog post from a few years back, so take a look if you’d like some more information. Questions or comments? Let me know below, or reach out at 800-545-1750.