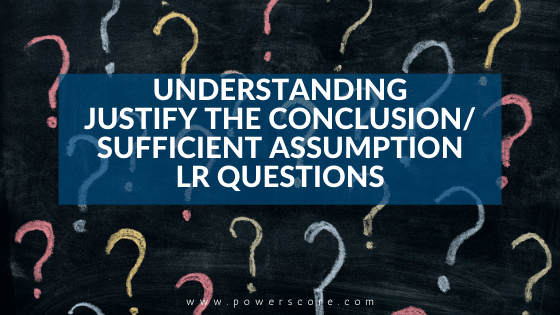 Let’s make sure we’re all talking about the same thing. In PowerScore terminology, we call these Justify the Conclusion questions, which you sometimes see elsewhere called Sufficient Assumption. The two types are identical:

Why the Different Names?

It’s because of LSAT history. In the early 90s, Sufficient Assumptions appeared so infrequently that the type wasn’t really formally understood and had never been identified by LSAC or any test preparation company. All questions in this logical area were called Assumptions, hence that holdover. For PowerScore, it was around 1997 where we saw a question that had Assumption-style language but had an answer that most definitely wasn’t an assumption or a mistake, and at least for us, that’s when I coined the term Justify the Conclusion for these questions (since that’s the act you must perform to solve the problem). A few years later LSAC published the SuperPrep (which included their explanations). That’s when they first used the terms Sufficient Assumption and Necessary Assumption, and those terms have become popular enough that we all now use the term sufficient/necessary assumption frequently.

What Are You Being Asked to Do?

So, now we can identify the names involved, but what is the exact task that a Justify question requires you to perform? Justify questions ask you to add a piece to the argument that then produces the conclusion. It’s like adding the last piece of the puzzle, and thereafter you can see the entire picture properly. The phrase Justify the Conclusion reflects that the correct answer makes the conclusion a proper one.

However, because you simply need to meet the minimum, there’s no penalty if you go overboard, which is why Justify questions can contain extra elements that are non-essential (which I’ll show below in an example). This differs markedly from regular Assumption questions, where anything “extra” or unnecessary means the answer choice is immediately incorrect. Regular Assumptions are very exact, with the minimum being all and everything you want. Justify questions need to meet a minimum, but then can go well beyond. This “minimum” point is where Justify and Assumption overlap. The fact that Justify questions can include more is where they differ.

While the above may sound easy, the difficulty in all this is that these questions (like regular Necessary Assumptions) force you to sort of “go back in time” and find missing pieces that the author had in mind when forming the argument, but that she did not explicitly state. That’s actually quite difficult to do when you already know the endpoint and there can be multiple ways of getting there. For example, let’s consider a scenario where you know two things about a friend of yours who is traveling:

2. She took a plane from Los Angeles to Chicago.

Now, you know she was able to get from Chicago to New York because that was her journey. And you know how she traveled for part of the trip. But how did she get from Chicago to New York City? There are numerous ways to physically make the journey (for example plane, car, bus, train, bike, walk, or any combination of these). A multitude of possible routes exist for each one of those methods. If this was a Justify question and you were tasked with proving she got to NYC after arriving in Chicago, all you need is just one of those many possibilities to be known and that makes it true that she made it to NYC. But with all those choices at hand and you not being sure about what she did until you read the answers makes the question challenging.

The key to the above is to find the piece in the answer choices—no matter how it is configured—that makes it certain she traveled from Chicago to New York City in some way. How it is phrased is not important. And any other stops along the way don’t matter: you just need the piece that says she made it from Chicago to New York somehow. Thus, any of the following answers would work:

And there are many many more that would work, nearly an infinite number of answers containing every possible travel variation. That large number of possible answers (which holds true for every Justify question) is one factor that makes these questions difficult (and think about how much harder this becomes when it’s about an abstract concept like goodwill and self-interest than when it’s about basic US geography).

In addition, note that while all of the responses above contain Chicago and New York, some contain other stops that were never mentioned in the original scenario (which is okay as long as the rest of the answer gets her from Chicago to NY). Note: none of the answers above would be correct in a regular Assumption/Necessary Assumption answer because of the specifics of each trip and the extra information—the author doesn’t have to assume any of those to make the final journey; there you couldn’t specify anything about the trip from Chicago to NYC other than it happened.

The next unusual part of Justify questions is how the premises in the stimulus and the answer choice link together to prove the conclusion. This is a reflection of you having to “go back in time” to determine what was happening, but it’s also unique to Assumption questions in general. Consider some of the other question types commonly encountered on the LSAT:

The last point has a lot do with why these questions are often challenging: after reading the stimulus, you have to separate the premises from the conclusion and then combine the answers with the premises. Just describing that task isn’t easy. Putting it into practice can be even more difficult due to the fact that the premises and answers are not physically next to each other.

There are ways to make these questions easier (the Mechanistic Approach, for one). But, the first step is truly understanding the task at hand. Hopefully the above helps with that just a little bit. If you have any questions or comments, please post them below!