You are here: Home / LSAT Prep / The Digital LSAT is Coming! 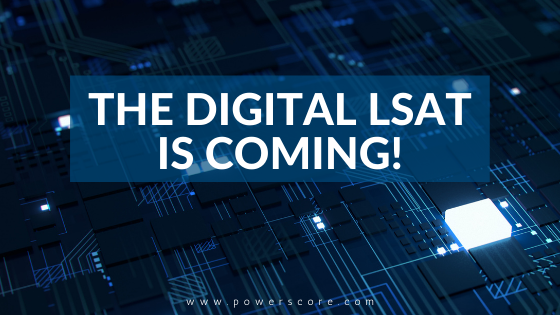 A few years ago I wrote a two-part article on “The Future of the LSAT,” in which I examined the exam’s history (Part 1) and speculated on what I believe could represent its future (Part 2).

In discussing what the LSAT-of-tomorrow might entail, I noted, with some confidence, that the test makers would almost certainly begin exploring a computerized version of the test before long. Specifically, I wrote:

“Digital testing comes with a host of advantages that pencil-and-paper exams simply can’t offer. They tend to be more straightforward to administer since there’s no distribution and collection (not to mention printing and shipping) of materials, no proctors to hire and train, no facilities to find and oversee, and all the other tedious tasks of analog testing. They’re extremely secure, since each tester has access only to the visuals on-screen, rather than hard copy content. They can be scored quickly and easily, and virtually incontestably, right in the testing room and immediately upon completion. And perhaps most compelling of all they’re almost ludicrously profitable: not only do they require none of the support systems of a test like the LSAT—think of just the multiple proctors passing out and collecting materials, calling time, monitoring potential cheats, etc—but because there’s no need for those systems, centers can offer exam opportunities essentially every day, year-round. In short, computer-based tests are an attractive prospect.

Of course, if you’re giving this much thought you’ve no doubt already enumerated a handful of differences between an LSAT and, say, a GRE that make the LSAT a greater challenge to offer and administer digitally in the same fashion. Most notably the fact that GREs and GMATs, and even the slightly less accessible MCAT, can be made available so frequently without fear of widespread content leakage because they test easily-altered concepts such as math and grammar. You can trust you’ll see the Pythagorean Theorem tested on each, but the question permutations testing it can number in the hundreds without fear of distribution or duplication. A question bank of tens of thousands exists for Math and ensures that individual test takers are each encountering a sufficiently unique exam.

Not so with the LSAT. Consider: in a single year’s worth of Logic Games only twelve are made public, four from each of the three released tests. Twelve! Can you imagine a sample that limited being used for a test given weekly? By the second month people would walk in with every conceivable LSAT memorized, essentially invalidating the whole enterprise.

So clearly if the test were to morph into widespread, readily-available digital form some serious changes to the current construct would be needed. But the appeal of computerized exams is almost certainly too great to be avoided forever, and my suspicion is that we’ll see a tidal shift in that direction before the decade is out. The days of Number 2 pencils are, well, numbered.”

Well that day has come: On May 20th, 2017, LSAC is conducting “The Digital LSAT Pilot Test,” where, in select cities, a limited group of applicants will sit for a free-of-charge, digital-tablet-based LSAT.

What We Know So Far

Two questions have naturally arisen among future test takers: “Why are they doing this?,” and, “How will it affect me?” The answers to both are somewhat opaque, but I think I can still un-muddy the waters a bit.

The “why?” is largely outlined above, in the text pulled from my earlier post on the test’s future. There are a number of advantages associated with digital testing, for provider and student alike, ranging from frequency and ease of administration to security safeguards to immediacy of results (one hopes, anyway). And let’s not forget that LSAC has an on-the-rise challenger in the GRE, which is surely a growing cause for concern. (Note: this is NOT solely in response to Harvard’s GRE announcement a few weeks ago; LSAC has been toying with the idea of computerized administrations for years, and preparing to field test a digital exam since at least late last year, as noted on page 5 of this December 2016 report: “I am particularly excited about the progress of the research on the possibility of offering a tablet-based Digital LSAT. We anticipate moving into the field-testing phase of this research in spring 2017.”)

In short, it was always just a matter of time.

How Does This Affect Test-Takers

What it will mean for test takers is less certain. For now, nothing. The paper-based LSAT isn’t going anywhere any time soon, and will almost surely be offered alongside the Digital LSAT for a time once a computer-based version becomes official. Even the GRE, which has been primarily computerized since the mid-90s, continues to offer a paper-based exam option several times a year in most parts of the world. So it’s a safe bet that, while the paper test may lose its exclusivity in due time, it won’t go extinct immediately.

So if you’re reading this in the 2000-teens keep your pencils sharpened. Longer-term it’s harder to say. If a well-administered, well-received tablet LSAT becomes reality in the next several years there are some compelling reasons (see above) to think LSAC will push hard to eventually make it a solo act. But that’s a long ways off, like 2-3+ years in my estimation.

So realistically my best guess is that we’ll see this initial, limited testing phase followed by an expanded round 2 (and possibly 3…4…) in the next year or so, and then a year or two beyond that, with sufficient data in-hand and feedback considered, a large-scale rollout of legitimized digital testing. Law schools may have their work cut out for them in evaluating paper versus digital applicants (if the formats prove sufficiently disparate), but the forecast seems abundantly clear: within 2-4 years a computerized LSAT will be an official alternative to the venerable but aging exam we’ve come to know, and could very well replace it altogether.

Lastly, since so much of this (administratively at least) remains necessarily speculative until we have feedback from the 5/20 participants, I plan to write a follow-up piece once first-hand reports begin to trickle in. That’s unlikely to do much to clarify LSAC’s intentions or timeline, but it will allow greater clarity on the mechanics of the test taking experience. Keep an eye out.

Thoughts or questions on the LSAT belatedly joining the 21st century? Let us know below.