You are here: Home / LSAT Prep / The LSAT Is About To Get Harder 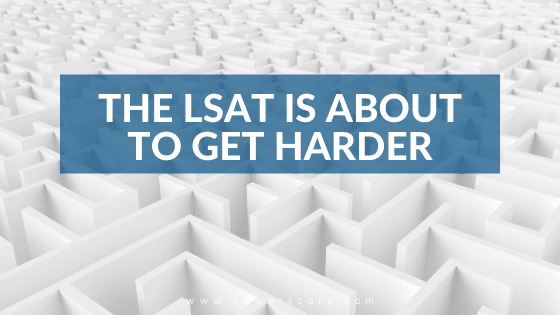 Any LSAT student reading the title above probably just felt their heart stop for a moment. I apologize for that! Fortunately, the LSAT won’t be getting harder immediately, but will likely be getting harder in the years to come. Let’s talk about why.

The rise of Big Data has been widely discussed, usually in reference to social media and advertising. But with the dawn of the Digital LSAT and the launch of LSAC’s own online testing site, the makers of the test now have a unique ability to see exactly what causes the greatest problems for students. In the old days of the paper test, the only data the test makers had access to was very fuzzy and imperfect: the exact selection percentage of each answer choice, questions completed, and tests cancelled. While that may sound like a lot, it’s not really much at all—testing outcomes were visible, but student behavior and performance trends were not.

Now, the test makers can see everything about your performance as you practice in their system (known as LawHub), including how long you spend on each question, the questions you perceived as problematic (via flagging), what you thought was important in a passage (via highlighting), when and where you changed answers, and even how fast you guessed at the end of a section.

The above data is collected when students take individual LSATs via Lawhub, but LSAC also has the ability to see how often students study, the question and reasoning types that they miss over time, how much or how little they study prior to an official test day, and even the LSATs that are most frequently taken. This massive trove of data provides them with the clearest view they’ve ever had of how people are preparing for and taking this test. And that should worry you because sooner or later they will use this information against you.

There’s Reason To Make It Harder

One thing we’ve seen with the pandemic is that students have been studying more, and that has lead to a bubble of high scores on the LSAT-Flex exams (you can track daily updates to the Applicants’ LSAT Score here). With this bubble, there will be a desire in the coming year to return the percentiles back to their prior state. This suggests the exam will become harder in the short term. And, given that there been some percentile creep over the years, a possible desire to counter that as well.

If LSAC does make the test more difficult, they have all the tools to do so. They can identify what concepts and presentations students found the most troublesome, and then replicate those more frequently on each future LSAT.

What Does This Mean For you?

The popular adage, “You have to fight fire with fire” comes to mind. You need to use your practice tests and problems sets—and the resulting data they produce—to closely analyze where you are going wrong and what you find the most difficult, and then attack those areas. If you are in one of our courses, you receive tons of information via our digital platform. And, if you are self-studying, you can use our popular Testing and Analytics Package to receive all the stats and feedback you need.