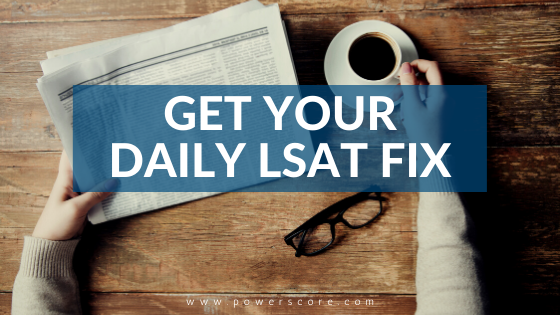 On Saturday, many June 2022 LSAT takers ran into a curious notification at the beginning of section 4, which stated that, “This section will be unscored.” Then, as the section progressed, they were intermittently presented with survey questions that asked about prior test questions, such as if they used scratch paper, and how useful that scratch paper was to them in solving the problem. Other test takers did not see this notification at the start of section 4, and to them it seemed like business as usual. What happened?

First, this wasn’t a prank by LSAC, or a system error—this was intentional, and part of a research testing plan being conducted by LSAC. Second, they have done some similar testing in prior years with other test items (such as with Comparative Reading), and so there’s no cause for concern that this is part of some new type of test protocol. This was part of a best practices approach to learning about the exam. That said, let’s look at some of the burning questions about what happened:

Q: Why did they suddenly give people a weird new unscored section? Did they mean to do that?

A: Yes, this was done by design. They haven’t explained exactly what information they were seeking, but clearly it related to the use of scratch paper and diagramming to solve Logic Games-style questions. That could be related to possible future changes to Logic Games, because, as many people know, there’s been discussion of Logic Games changing in 2024. But in order for any changes to occur, LSAC would have to first explore and research new items. This could be and perhaps is the start of that.

Q: I didn’t get this notice or section, and the test seemed normal. What should I do?

A: Nothing at all—you had a regular LSAT, and were not part of the research being conducted. It will not have any effect on you or your score.

Q: Was that “This is unscored” notice legitimate, or could they actually score that for my test?

A: It was a legitimate notice and there is no chance that an exploration section like this would be scored.

Q: Did everyone get this unscored 4th section?

A: No, some students faced what was a “regular” LSAT with the Experimental section as one of the first three sections (or even as the last section), and theirs was a normal LR, LG, or RC section. But those who received this special research section always had it 4th.

Q: I didn’t do that section when I saw it was unscored. Am I screwed?

A: No, it won’t have any effect at all on your results, and there’s no penalty for skipping it!

Q: I’m taking the test on Tuesday as an international student, or as a paper and pencil student, will I get this section?

A: No, you will not. They only used test takers on Saturday of the main administration for this research.

A: Maybe, but there’s been no announcement, so do not go into that exam expecting it. Instead, approach it like a normal LSAT.  We‘ll talk more about this in our PowerScore LSAT Podcast recap of this LSAT later this week.

Q: Wait, if I can get this on a future test, will I have to face this weird section 1st, 2nd, or 3rd? That could throw me off.

A: No, research like this is always going to appear as the last section on your exam, if you see it at all.

Q: If I see this section on a future test, what should I do?

A: We suggest doing it because your participation helps future test takers. This won’t affect your score, but it quite possibly will affect test takers down the line, so treat them as your future law friends and complete it as best you can.

Q: Why didn’t LSAC tell us beforehand that this was going to occur?

A: Well, we wish they had, but apparently their research is helped when students don’t know it’s coming. Plus, they didn’t want to create panic or concern before the exam even started.

Q: I think it’s unfair that some people got to the end and knew immediately that the section was experimental. That gave them an advantage!

A: We understand that view, and there are solid points that support it. The counterpoint is that those students did not know during the first three sections that those were real for sure. So, by the time they arrived at section four, they couldn’t change their performance on those early sections. This, by the way, in part explains why LSAC did not warn test takers prior to exam day. They didn’t want people thinking for sure that the early sections counted. As an aside, you should act like every section counts until you know for certain otherwise! For what it’s worth, in actual practice we talked to students who both loved that they got the research section, as well as those who hated it.

Q: I’m taking the LSAT later in 2022 or in 2023. Is it possible that they could spring this section on me and it would be real? I don’t want to spend my time studying Logic Games if it’s suddenly going to change on me.

A: Introducing new scored items to the LSAT is not a process that happens overnight, and any changes to scored content would be preceded by prior notification and the release of prep materials—such as sample questions—by LSAC. That is what they’ve done before for every major test change, and that is what they have said they’d do going forward. So, when the time comes for a big test change, there will be ample notice! The above said, this section was remarkably easy and anyone who got it would have loved for it to be scored.