You are here: Home / Law School Admissions / Struggling with the September LSAT? Is December Too Late? 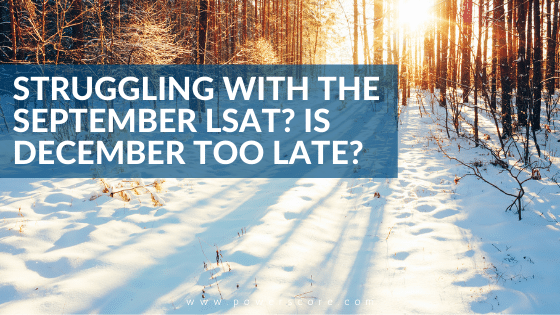 One of the most common questions we receive is whether applying early with a September LSAT score is a better strategy than taking the December LSAT and possibly getting a better score. Many students think the advantage of applying early is so great that it is better to just take the September LSAT even if that test doesn’t produce their best LSAT score. But that is not the case at all. So let’s talk about what to do if you either don’t feel great about the upcoming September LSAT or if you take September and it doesn’t go well. Hint: you are in better shape than you think!

The Importance of the LSAT

First, let’s talk about the importance of the LSAT in the admissions process in general. For better or worse, your LSAT score is the single most important factor in the entire law school admissions process. No, really, you did not misread that. Amazingly, a four-hour test outweighs your four years of college. It outweighs what your professors or employers say about you. And it outweighs the essay that you spent months crafting in order to carefully tell the committee who you are.

Your LSAT score carries this much weight because it’s the only universal comparison point between you and every other applicant. Grading emphases changes from school to school. Recommenders can be influenced or unclear. And you can get help to write your essay. But none of those factors are as powerful as quickly and easily comparing people using a three-digit black and white number.

To underscore that point, consider that the typical law school admissions index formula (used for ranking applicants) weights your LSAT several times heavier than your GPA. In many, the ratio is 4:1 or 5:1 in favor of the LSAT. Thus every point on the LSAT has an outsized effect on your admission chances. Consequently, the first and most important rule to keep in mind when looking at prospective LSAT dates is: Take the LSAT that will produce the highest score for you. It’s the most important factor in your Applications folder. You absolutely want to do everything possible to maximize your score.

While the importance of a high LSAT score is easy to understand, conventional wisdom also dictates that you should submit your completed application as early as possible. Law schools use a rolling admissions process. This means that schools consider applicants in batches as the applications arrive. Thus, when an application comes in at the beginning of the application period (in the fall of each year), there are the fewest number of competing applications completed and the greatest number of available spaces in the class.

That situation then reverses over time. As students are accepted, there are fewer available spaces but more total applicants since the applications keep rolling in. So, the benefit of applying early as a general rule is well-established.

This is where the conflict comes in. Because your LSAT score is hugely important, and the earlier you apply, the better your chances. So, the deciding question is: which is more important?

To determine the answer, we performed a comprehensive statistical analysis of applicants. The outcome was clear. The higher LSAT score was far more important than submitting the application early. You can review the full results of the study at Does submitting an early law school application improve your chances?, but the analysis showed repeatedly that the higher LSAT score was more influential. For example, at Georgetown, each month you applied earlier gave your application a 21% boost whereas each additional LSAT point provided an 83% boost.

What Happens When You Apply In January

If that information isn’t enough to ease your fears over using a December LSAT score, then let’s also look at how applying in January places you in the applicant pool as whole. A while back, LSAC released applicant timing numbers. I made an analysis of when students applied based on that information—see Hoping to apply to law school early? What actually is early? for the full discussion.

The short version is that if your application is complete by about January 10th or so, you will still be in the “First Group,” which is the first 40% of applicants. Thus, regardless of score considerations, while September LSAT does allow you to apply earlier, the December LSAT still allows you to be in the first half of applicants, and that’s pretty reasonable on its own.

When adjusted for the bump that comes along with an expected higher score (as the result of two and half more months of studying), then December becomes a  completely viable backup option if you don’t think September will produce your best effort, or if it happens that you take September and don’t perform as well as you had hoped.

So, if you are concerned about whether you will do well in September, you do have an alternative option. And it actually will be the superior choice if you can produce a better score with the extra study.