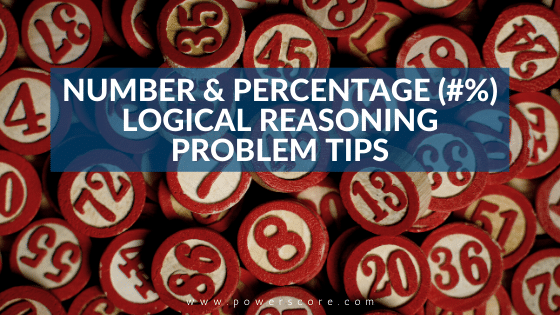 Are you having trouble with Number and Percentage Logical Reasoning problems? You’re not alone! Number and Percentage problems can be among the most difficult, so the fact that they are giving you some trouble isn’t unusual.  They are likely to appear at least a few times on your test, so you’ll want to make sure you have these ideas locked down.  Here are some helpful suggestions to improve your #% performance, and several examples to make the ideas stick.

Next, the advice I give in the LSAT Logical Reasoning Bible about #% problems is fairly general on the whole, and that is intentional. There are so many different scenarios that can occur that getting too specific would mean that the advice wouldn’t apply in many situations. But, %# questions tend to revolve around a few basic errors:

Identify the exact number or percentage that is being discussed. And if an overall total is given, make note of it as well. Many student assume that they know what was said without making sure of it, and the makers of the LSAT know that will occur, and create wrong answers that then look good. So, make sure you know what was talked about in detail. Numbers and percentage problems often hinge on the interplay between three elements.

So, whereas in point #2 above I advised making sure you know exactly what was said about each number, percentage, or total, here my advice is to look on the other side as well:

The LSAT often gives you information on 1 or 2 elements, but leaves other parts out. The questions often hinge on what’s been left out, so make sure you know what it was. For example, if you have just a number and the total, but nothing on the percentage, there’s a reasonable chance that the answer will revolve around that percentage idea. More on this shortly.

If you are given static, fixed numbers (for example, you have 100 marbles, and 40 of them are blue) then it’s easy to figure out what’s going on (40% of them are blue; 60% of them are not blue). The LSAT doesn’t want to make your life easy, and so often one or more of the numbers they give you is rising or falling. That means the next rule is very important:

Watch for movement in any number, percentage, or total, and make note of whether it is rising or falling. When these numbers and percentages begin rising or falling, change is occurring and it becomes trickier to draw solid conclusions. This is especially the case because of the next tip:

What if I only say that later I get more green marbles – can I prove that my percentage increased? No, not without knowing the new total number of marbles. Maybe I got ten more green marbles, but I also got 90 more that were not green, bringing my total marbles to 200, and reducing the green percentage to 25% (50 out of 200).”

In this tip, I specifically point out that the arguments often have errors. This means that the presence of an argument is key, and as we know from earlier chapters, to have an argument you need a conclusion. So:

What Is the Conclusion?

If you have a conclusion, that’s when you see an error that is usually based on confusing the number and percentage idea. If there’s no conclusion (meaning you are looking at a Fact Set), then often a piece of information is missing and you have to determine what that is.

The presence of an argument often tells you what direction you might be going in, which also means that the question type can help tell you what’s happening. If you have a Must Be True question, often you’ve read a Fact Set, and the correct answer supplies a missing piece of info. But if you have a Strengthen or Weaken question, you’ve most probably read something with a flaw in it, and it’s up to you to have identified that flaw.

To help highlight this idea, I’ll use an example one of my colleagues cited recently:

So, to weaken the argument, we can propose that the Gainsville’s total population has drastically increased over the years. And, inversely, to strengthen the argument we can say that its population has decreased: more crime, spread across fewer people, would guarantee that the crime rate is now higher, and that your risk of being a victim has increased. If they ask you to identify an assumption upon which the argument depends, it would be that Gainsville’s population has not substantially increased over the years. (Another assumption would be that we haven’t changed the definition of what constitutes a “violent crime”.) Does that make sense?

The LSAT isn’t a math test, and so you never really have to compute any of these problems, or find an actual mathematical solution. What you do have to do, however, is understand the range of possibilities under the scenario they describe. such as with the Gainsville example above, I don’t need to know the exact number of residents, just that the total number of residents has an effect on how we view the argument. So, don’t worry about doing real math, and instead worry about how the numbers work together in general.

Ok, those tips hopefully are helpful, and if you are looking to work on more #% problems, we do offer problem sets in our Digital LSAT Testing and Analytics Package that contain sections specifically devoted to these types of problems (and many others).