You are here: Home / LSAT Prep / Official Scoring Scale for the New LSAT 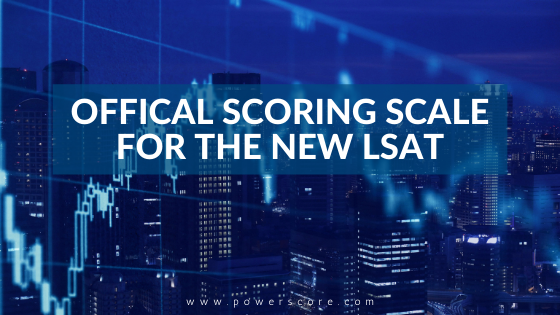 When LSAC added sections from the May 2020 LSAT-Flex administration to their Prep Plus package, it allowed us to see exactly how they score a Flex test. Although the Flex version of the test is no longer with us, this data is still relevant to the new LSAT.  Let’s take a look at LSAC’s official scoring scale for the May 2020 Flex test:

*** There is no raw score that will produce this scaled score for this form.

Note: This scoring scale is specific to the May 2020 LSAT-Flex, not any other Flex exams.

This Flex scale has a number of intriguing features, so let’s take a closer look!

The Scale is Loose at the Top


The scale is fairly loose at the upper end. 67 out of 76, or -9, for a 170 is the 4-section equivalent of missing 12. That’s far from extraordinary but it is on the more generous end of possible curves. In fact, only two other tests since December 2016 have been that loose or looser. If want to see all of the LSAT Score conversions (from June ‘91 to the most recently released scale) we have a comprehensive chart here: LSAT Raw Score Conversion.

The Scale is Extremely Loose in the Middle

The scale is unprecedentedly forgiving in the middle! Let’s look at some score markers through the mid-range for reference:

The Scale Tightens Up at the Bottom

The scale is historically unique at the low end, too…but oddly by being tighter than ever! This clearly won’t affect most people, but requiring 16 correct on May to achieve a 121 is the equivalent of needing at least 21 right on a 4-section test, and that has never happened before (the most ever needed previously was 20, and more commonly these days it’s closer to 18). Looking at a 131, in May you needed 21 right—that’s 28 on a typical, full-scale test—and only one test, June 2005, has ever required more correct answers for that score.

So as forgiving as the curve was for higher-scorers, lower-scorers were forced to answer more questions correctly than ever to get the same results.

Why Was the Scale More Forgiving Overall?


So what led to the overall looseness of the curve? Let’s explore some plausible factors.

The takeaway then is that people correctly answered fewer questions than usual from scoring ranges of about 140 and up. And the most severe performance drops occurred through the middle scores of 145-160, with a less notable—closer to a single point below average—dip at 165+. Fortunately, the curve appears to have functioned exactly as intended: it softened scoring requirements sufficiently to offset any ill-effects of the test itself.

So Many Missing Scores


A quick glance at the conversion chart shows that an unusually high number of 120-180 outcomes were impossible to achieve for the May LSAT-Flex, with nine total results missing from the scale. This too deserves discussion.

First, every LSAT-Flex is likely to exhibit this tendency. With only 77 possible raw scores—from 0 correct up to 76—versus the typical 101-102 question raw scoring range, there are simply fewer scoring outcomes to convert into a scaled number from 120-180. And given how many of the raw scores produce the same scaled score (see any score above where its high and low raw numbers are different), there are naturally going to be some scaled results that get left out. So no surprises there!

The Bell Curve At Work


As for where those absent results appear, all of the impossible scores occur below 138 and above 175, or in the bottom 7% and upper 0.5% of scores. Why? There are so few people comprising those two score zones that differences of even a single question answered correctly or incorrectly are magnified when raw scores are converted. Right and wrong become increasingly meaningful when there is less competition; it’s easier to separate yourself from fewer people, in other words. And sometimes there are so few people that a single answer right or wrong separates them not by one point, but by two, leading to the score skipping in question.

This is the inverse of why we see most duplicate scores—the same score produced by different raw question counts—in the mid-range: there are so many people piled up near the center of the bell curve that a single extra question right or wrong may not sufficiently distinguish them from one another, or at least not enough to warrant awarding them different final scores.

The Other Missing Score Imbalance…

…Is Less Imbalanced Than It Looks

How Would It Look As a Regular Scale?