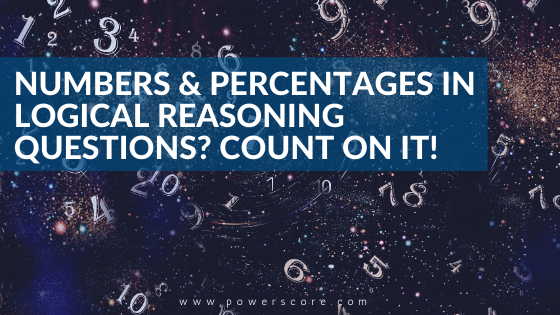 The authors of the LSAT love to play with numbers. This makes sense when you consider that the LSAT is a test of logical reasoning, and math is completely logical. While it’s true that they sometimes test our understanding of actual numerical concepts, like averages and ratios, most questions are not testing your math skills. Don’t worry, you will never have to recall the Pythagorean theorem. Instead, they test your understanding of logical relationships that happen to involve numbers and percentages. When you encounter them, it can sometimes help to supply some numbers of your own to make sense of them.

Let’s look at an example. On the December 2016 test, there was a question about a car company (Company X) selling most of their cars last year to the residents of a particular town (Town Z). When you see the key word “most,” immediately insert some numbers. Keep it simple, in this case let’s imagine the total number of cars Company X sold last year is 100. “Most” means more than half. So, that means Company X must have sold at least 51 cars to the folks in Town Z. Maybe more, sure, but at least that many. Now, with those numbers in mind, you can begin to visualize what the stimulus is telling you.

The stimulus in this question goes on to say that most cars the folks of Town Z bought last year were not from Company X. Thinking in terms of our numbers scenario, that means the 51 cars they bought from Company X are less than half the total number of cars they bought. Therefore, they must have bought at least 52 cars from one or more other companies. This means at minimum, Town Z bought 103 cars last year. Using our placeholder numbers, 51 from Company X and 52 not fom Company X. At this point, that’s all you know.

Determining What You Know

The wrong answers to this question talk about comparing last year’s sales in Town Z to other years’ sales or about who else sold cars to Town Z. We don’t have information about any of that! While the stimulus did include that Company X had it’s best year last year, they told nothing about prior years’ sales to residents of the town. We don’t know if sales went up or down in Town Z, what their overall market share was, or what the townspeople bought/didn’t buy in other years. There’s not even information about where those 52 other cars came from.

So, break down what you do know by using your placeholder numbers as a guideline. Make up any numbers you like and you will come to the same, inescapable conclusion. It must be true, the numbers don’t lie! That’s the correct answer to that question.

Use Numbers to Illustrate the Question

Whenever you encounter claims in LR about numbers or percentages, put them into context by supplying simple numbers and seeing if the evidence you have supports the conclusion. 100 works great for any problem involving percentages. When the test asks you to compare two groups, ask yourself if you know the relative sizes of the groups. If not, trying imagining one group that has 100 people/things in it and the other has 1,000,000.

Supplying numbers help clear that up quickly and easily. Imagine Saxapahaw has a population of 100 and Hickery has a population of 1,000,000. You can see that such a numerical conclusion based solely on the claims about “most” is not supported. Percentages alone do not prove numbers and vice versa.

Be suspicious of claims involving numbers and percentages on the LSAT, because most of them are flawed. When in doubt, make up some numbers and see what you can and cannot prove! Need additional help? Head over to our free LSAT Discussion Forum to ask real LSAT experts.