You are here: Home / LSAT Prep / Nature vs. Nurture: The LSAT’s Take on the Root Causes of Human Behavior 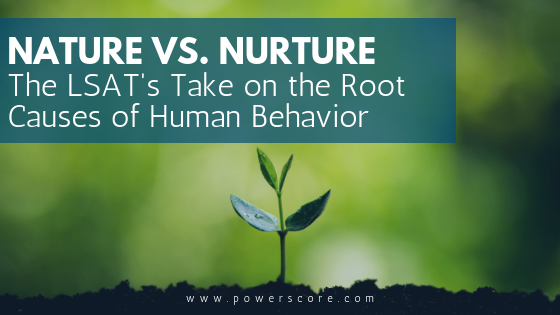 It may have been as early as middle school when you were first introduced to a psychosocial debate that attempts to answer perhaps life’s most important question. From the time humans developed the ability to formulate questions, we’ve wondered why we are the way that we are. The concept of Nature/Nurture has been around since at least the Elizabethan period, but the ideas were first proposed back in ancient Greece when Aristotle and Plato discussed the origin of human knowledge.

This concept has shown up repeatedly on the LSAT over the years! Test makers have discussed behavior traits in infants, foraging patterns in honeybees, and even Japanese monkeys who love to unwind in natural hot springs. Side note…I thought that last one was just too weird to be true, so a few years ago I went to Japan to see for myself. Turns out, these macaques do very much enjoy a good soak, but don’t always like humans stopping by to disrupt their time at the spa. In terms of explaining characteristics of personality and behavior, Nature refers to innate dispositions that are pre-programmed into human existence. Subscribers to this side of the debate explain that certain behaviors and characteristics are there from birth. In contrast, Nurture refers to the influence of external factors. This argument believes outside experiences account for behaviors and preferences held by both humans and animals.

Nature/Nurture on the LSAT

Personally, I think human and animal behaviors are best explained by at least some combination of the two factors. Test makers often overstep their logical bounds and conclude that some situations can be explained exclusively by Nature or Nurture. At its core, the Nature vs Nurture debate is a causal one. Therefore, the forms that correct answers take in varying question types across the LSAT still conform to the causal tendencies we discuss in our courses. But keeping an eye on this subject matter can really help. For example, if you notice that a stimulus in flawed argument begins to wander toward discussing human or animal behaviors, look for a conclusion declaring that the behavior is attributed to only one side of this debate. What happens next depends on the exact question type at hand, so let’s break this down further.

The answer to a Flaw question is not a fact taken to be true, one that changes the argument in the stimulus. Rather, a Flaw answer simply characterizes the mistake made between the author’s premises and conclusion. Accordingly, a Flaw answer in a Nature/Nurture situation is likely to call out the argument for its False Dilemma. That answer will highlight that it exclusively chose a side as the sole reason (aka cause) for a given behavior.

As the Nature/Nurture debate is a causal one at the core, we have strategic predictions when it surfaces in a Strengthen question. Like in any causal argument, one surefire way to strengthen the conclusion is by eliminating an alternative cause. In the Nature/Nurture debate, there are only really two competitive causes. So, the correct answer likely eliminated the opposite side of the debate that the author picks.

This stimulus again talks musical taste, but this time focuses on much younger humans. Thankfully, these six-month-old babies have yet to develop their own like/dislike opinions. Because of this, all we know is that they pay more attention to certain octaves than others. The evidence hints at both sides of the debate. It considers how young the subjects are (Nature) and how prevalent these octaves are in cultures around the world (Nurture). The conclusion, however, jumps to an overly certain judgment and chooses Nature. It claims that “humans probably have a biological predisposition to pay more attention to those intervals than to others.”

There are three particularly interesting answers in this question.

This stimulus discusses the foraging activities of bees. We are told that older bees, which usually forage outside the hive for food, have larger brains than younger bees that do not usually forage. This phenomenon of the larger brain seems to then have two plausible explanations.

The argument concludes that bees had larger brains due to foraging. So, the author hitches their wagon to the Nurture explanation.

Like in any causal Weaken argument, a successful pattern in correct answer choices is to show an instance where the cause is absent but the effect is nonetheless present. That is no exception here, but this subject matter lends itself to an especially predictable twist. Since the author chose Nurture, we could weaken the argument by providing an instance where that behavior was non-existent but the Nature explanation remained, essentially promoting the alternative cause. The correct choice helps weaken the argument: “The brains of older bees that never learn to forage are the same size as those of their foraging counterparts of the same age.” This essentially argues against Nurture and promotes the opposing Nature-based explanation.

This question discusses the changing taste preferences in young children. One-year-old babies apparently prefer the taste of sweet food over salty food. However, if you feed a one-year-old salty food instead of sweet food for an entire year, by the time the baby is two years old they will prefer the salty food over the sweet. Again, this phenomenon could be explained by either side of the debate. Perhaps taste preferences can be affected by dietary choices (Nurture). Or, maybe taste preferences organically evolve as a child grows older (Nature). This argument goes the former route and concludes that “a young child’s taste preferences can be affected by the type of food he or she has been exposed to.” If you run into a causal argument in an Assumption question, eliminating an alternative cause not only strengthens an argument, it is a required fact if the conclusion is valid.

Much like in a Strengthen question, the correct response functions by eliminating the Nature explanation to defend the Nurture conclusion. “Two-year-olds do not naturally prefer salty food to sweet food.” In running the Assumption Negation Technique, if two-year-olds do naturally prefer salty food, then feeding your baby Cheez-It crackers for a year doesn’t do anything but contribute to childhood obesity.

In short, keep an eye out for this subject material in arguments based on flawed reasoning. Use this awareness of the Nature/Nurture debate to help lead to much easier answers in otherwise rather tricky situations. There are of course dozens of additional examples of this phenomenon across the history of the exam. So, feel free to add in any others you spot into the comment section!