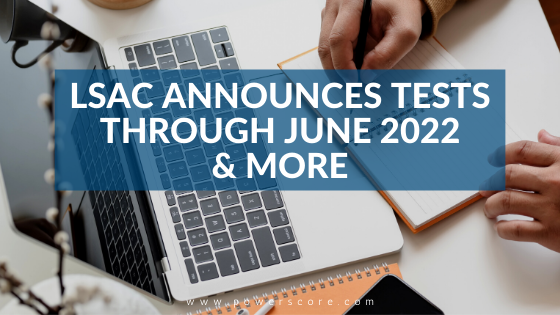 LSAC has just made a major announcement covering everything from the next 16-months’ worth of test dates to the future format of the LSAT. What follows is a rundown of everything we’ve learned so far, as well as PowerScore’s take on these developments!

The Next Nine Test Dates

First, we now know the official test dates for every LSAT through June 2022. These dates represent the first day of each test week, with exams offered over several days (anywhere from 2-5) depending on total enrollment.

Obviously this is excellent news, as there’s now zero mystery to the test schedule for the next nine exams, allowing people plenty of time to establish target test dates and organize their prep accordingly!

We have also received information concerning the planned administration types and formats of future LSATs! Happily, remote (at-home) testing will remain in place as a permanent feature even if in-person testing is able to be safely resumed and offered at some point. However, the structure of the LSAT will soon receive a notable overhaul:

Starting in August 2021, Breaks Are Back!

Registration for the June 2021 LSAT will open next Monday (2/22) and run through 11:59 pm EST on Thursday, April 29th. This end date is intentional: 4/29 is the score release date for the April test, so anyone waiting on April results before making June plans will have the rest of that day to decide. Registration for subsequent tests—August 2021 and beyond—will begin in mid-May of this year (exact date TBD).

While this is undeniably a lot to process, the big-ticket items of long-term test dates and familiar formats appear to be extremely positive! If you’re testing in February, April, or June, it’s business as usual. For those eyeing August and beyond, some adjustments will need to be made to prepare for the new, four-section LSAT you’ll face, but it’s nothing we haven’t beaten before: we’ve got you covered so you’ll be ready to crush it!

Get in touch with any questions or comments below or at lsat@powerscore.com, and stay tuned for more updates as we receive them!