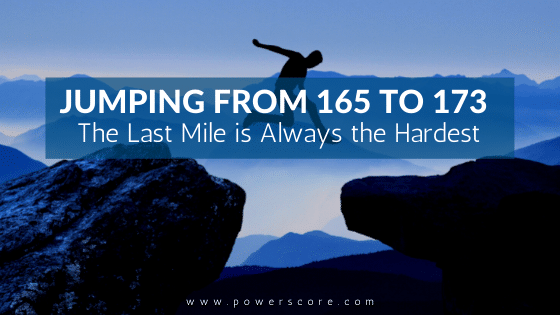 Getting from the 90th percentile on the LSAT to the 99th percentile is perhaps the most difficult “jump” you can make. Many high-scoring test-takers get stuck in the mid-160’s, seemingly unable to move up. Why? For one thing, they probably reached their score relatively quickly – within a few months, or even less.

Indeed, if you started in the mid-to-low 150’s, all you needed to do is learn how to tackle the major game types, improve your Reading Comprehension speed a bit, and master the fundamental concepts in Logical Reasoning. As long as you develop a strong conceptual understanding of the material, your score was certain to increase.

With the right study regimen, you gradually became more efficient in how you tackled the various question types, improved your overall section strategy and time management, and saw your scores creep up. There is a lot of low-hanging fruit on the LSAT, so to speak, which is why many test-takers mistakenly assume that they can maintain their initial rate of increase throughout their studies.

Unfortunately, once they reach the mid-160s, a lot of students hit a plateau. It goes without saying that, generally speaking, the more ambitious your target score is, the more effort it will take to get there.

Once you hit the mid-160s, it could take another two months to jump half as much! Roughly 10% of the LR questions on your test will classify as “very difficult.” Additionally, one out of every four games (and one out of every four RC passages) will be similarly difficult. To get a score in the 170’s, you cannot afford to miss more than a handful of these questions. That’s when students often seek professional help – through online instruction, tutoring, or a combination of both – in order to identify and fix specific gaps in their skill set or knowledge base.

Occasionally, however, getting those few extra points is easier than you would expect. Here’s a confession I need to make. I only started scoring in the high-170’s when I stopped trying to get a 180! I’m a stubborn person, and an even more stubborn test-taker. I hate quitting, especially after sinking (what seems like) a lot of time into a particularly challenging Logical Reasoning question. It’s a sunk cost, which used to make me terribly unhappy.

So I would keep throwing good money after bad, not realizing that the probability of getting the question right after the first 1:45 min decreases substantially. (Good thing I don’t gamble or I’d lose my shirt). In the end, even if I got the question right, the opportunity cost of solving that question was invariably higher than the potential benefit (a single point), as I would often end up guessing on a handful of questions at the end of the section.

The Scoring Scale Is Forgiving

After getting burned a few times, it was time to admit that as hard as I tried, I probably could not get every single question right. Thankfully, I did not need to: I could miss 1-2 questions and still get a 180; I could miss as many as 10 questions and still score in the 170’s. The LSAT scoring scale is incredibly forgiving, for one simple reason: this is an incredibly challenging test!

So, don’t obsess over your target score: you may be improving without even realizing it. It is counterproductive to worry about your pace to the exclusion of everything else. This almost always leads to rushing, which invariably lowers your score. Focus on the process, and let it do its magic. When you really feel stuck, give yourself a break and move on! You will thank yourself later for it.