You are here: Home / LSAT Prep / How to Best Review LSAT Practice Questions 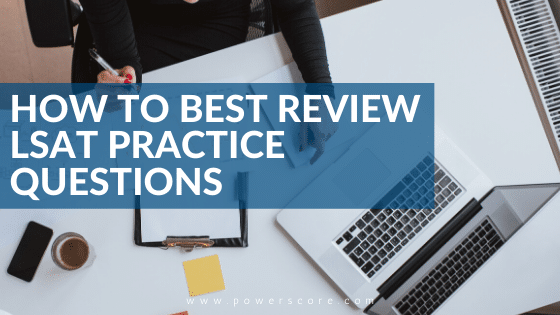 In another post, we outline exactly how to take LSAT practice tests. In this post, I’m going to examine in a bit more detail the process of performance review, specifically how to assess your progress in terms of your initial confidence about the answers you’ve chosen.

The final note in practice test article above describes the importance of closely analyzing your results.

“You need to perform a thorough post-test review, analyzing your performance and determining the most appropriate study plan moving forward. Without this type of comprehensive self-analysis there is no way to determine why you scored as you did, which means your potential for improvement is severely restricted. Put more succinctly, you have to identify and understand your mistakes if you expect to have any chance of correcting them.”

That’s a critical point, certainly, but I want to expand it a bit with a recommended strategy for working through practice problems and their subsequent review.

What’s become apparent to me over the years as I’ve watched people practice, check their answers, and move on (often disgusted), is that not enough attention is being paid to the raw data, the moment when a question is first encountered and an answer is selected, but unverified. Sure, people consider their choices after the fact with an answer key in-hand–and then sigh in frustration at the mistakes revealed–and that’s an undeniably necessary step. You need to know how you did, after all. What concerns me is the conspicuous absence of any introspection prior to that moment, when all you have to weigh the likelihood of correctness is your own confidence about the decisions you’ve made.

“Well so what?,” I can hear people asking. What matters is whether I chose correctly, not whether I loved my choice, right? Wrong. The certainty with which you keep and kill answers is a hugely valuable indicator of not only how well-attuned (or misguided) your understanding of the LSAT in general is, but also of more micro-level notions like conceptual strengths and weaknesses, probable section outcomes, and day-to-day progress. Simply put, if you find yourself frequently more confident than your actual results warrant it’s an unmistakable sign that you’re not sufficiently guarded against the test makers’ traps and would likely benefit from revisiting some fundamental discussions; if your confidence on the whole is low (deservedly or not) then you need to focus the underlying skill set as well as your mentality. If you find your confidence is well-justified and growing it’s an encouraging sign that you’re on the right track!

So how do you measure something as seemingly intangible as “self-assurance”? The answer is that as you work through problem sets, whether a handful of LR questions, a logic game or two, or some RC passages, you should quantifiably note exactly how you feel at the moments of both first attack and final decision: the initial deconstruction of the information (stimulus and question stem, game scenario and rules, or RC passage(s)), and the selection of an answer choice.

How to Review Your Performance

I recommend a simple numbering system of 1-5, with numbers representing the following rough estimations of your understanding and performance.

This stimulus was extremely confusing and I struggled to differentiate premise from conclusion (or even determine if a conclusion is present); I cannot identify the question type with certainty; the game scenario feels foreign or unrecognizable; diagrams elude me for many of the rules and/or inferences; the passage topic and broad elements like main point are a mystery. Similarly, the answer choice I selected was only slightly more informed than a blind guess, and it would be something of a surprise if it is correct. Estimated probability of success ~25%.

2. Parts of it made sense, but overall I was confused.

I feel like parts of what I read made sense–I saw the conclusion but couldn’t determine its validity; I recognized it as an Advanced Linear game and picked a base but struggled to make meaningful inferences; then I identified what I think is the author’s viewpoint but had to reread several portions of the passage and certain big ideas are still unclear; in due time I narrowed it down to two or three contender answers and eventually chose one, but would potentially change my mind given the opportunity. Estimated probability of success ~35-40%.

I moved fairly well through the question content and mostly understand it in its entirety, although I was slow and still fear I may have missed something (a crucial inference, perhaps, or a reasoning error); my diagram has a number of inferences that I believe to be valid, but I suspect there may be more; I know what kind of question this is, but am slightly unsure about the strategies most relevant to solving it; I prephrased but am not certain it was terribly useful. The answer choices were narrowed down to two, and I chose the one that seemed more likely. Estimated probability of success ~60%.

4. Highly confident, but not absolutely certain.

I recognized the scenario encountered and worked through it with only occasional pauses or hesitations; immediately I could parse the stimulus into premise and conclusions, and noted the presence of identifiable reasoning (conditional reasoning, for instance); I knew right away that this was a Grouping game and chose the appropriate base(s) and my inference are powerful and likely sufficient, although I could’ve moved faster; I had a prephrase that assisted me in evaluating answers. A competing answer choice was briefly entertained, but I eventually eliminated it in favor of my final choice and am pleased with the decision. Estimated probability of success ~80%.

I attacked the stimulus/setup/passage with complete mastery and understanding, making inferences adeptly and with virtually no second guessing; my prephrase was quickly formed and powerful when applied; I felt equally sure of my selected answer choice (and those I dismissed) and would be absolutely shocked to have missed this question. Essentially this represents an ideal experience, start to finish. Estimated probability of success ~95+%.

I imagine that nearly every question, at least early on, will yield mostly 2s, 3s, or 4s throughout, with occasional moments of near-total confusion (an irksome “1”) and infrequent instances of complete dominance (a glorious “5”). But understand that no matter the rank, evaluating question components in this way reveals a tremendous amount about not only how you’re navigating through test content and feel about your comprehension, but also, once you compare your predicted successes to reality, about how accurately you’re able to self-evaluate.

How to Use That Information

Picture a scenario where you consistently miss questions you labeled with a 4 or a 5 (initial info and answer choice). What that means is that you’ve either grossly overestimated your facility with the question content, or badly misjudged the distinction between a desirable answer and its competition (or, alarmingly, both). In either case you’ve identified questions–and possibly, given a pattern, question types–that merit some serious attention before you move on. Scrutinize the stimulus, scenario/rules, or passage for misinterpretations, and spend ample time confirming why your answer was in fact incorrect, and the credited answer superior. But don’t put aside your work until you’ve satisfactorily resolved these worrisome issues. Any moment deemed a 4 or 5 needs to be a lock; when it proves otherwise adjust both your scale and your skills accordingly.

Likewise, reevaluate all of your 1s, 2s, and 3s to determine what caused the trouble: was the stimulus, game, or passage particularly challenging or unusual? If so learn it well so that future instances are recognizable and more easily managed. Were you hung up on a pair of competing answer choices? If so work hard to decipher their differences and satisfactorily uncover why one was preferable. Low-rated questions provide distinct instances of potential improvement, and should be reviewed until your comfort approaches a 4 or 5.

The goal in all of this, of course, is twofold: (1) You want to better understand not just the LSAT, but the nature of your relationship with it. Until you can accurately gauge the test’s effects on you then you’re burdened with both a level of uncertainty that should strike you as supremely discomforting, and a fundamental misunderstanding of the steps needed to remedy that discomfort. (2) You want to see the numbers assigned rise over time. Presuming they’re accurate, then assigning higher numbers means you’re getting more questions correct, and reliably insightful about that outcome as you engineer it. And that, we can all agree, is the LSAT endgame.