You are here: Home / LSAT Prep / How to Increase Your LSAT Score Simply by Using Your Nose 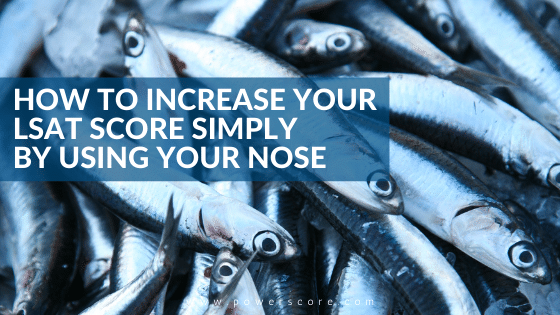 As I’ve mentioned on a number of prior occasions, some of the most important weapons you have in your battle with the LSAT are your mental strength, confidence, and overall outlook. Of course, your processing speed and reasoning powers are critical, but I look at them as only half of the equation. If you process quickly and understand argumentation, that will take you a long way, but if you are also afraid of the exam and don’t fully trust yourself, you will fail to reach your potential.

Because of the above, I pay close attention to developments in the field of psychology. An article in last month’s Journal of Experimental Social Psychology caught my eye because it addressed how our sense of smell can affect our reasoning ability, and in fact help us to be sharper in detecting misleading information. Flawed argumentation is something that occurs all the time on the LSAT, so if there’s a way to become better at detecting it, I want to know about it. So what was the special trick they were talking about?

As described in an article on Futurity.org, when people are in the presence of a bad smell (such as rotten fish), they become more suspicious and better able to detect questionable reasoning. The author attributes this effect to a basic survival mechanism: the health necessity of avoiding rotten or dangerous food. Eating bad food can kill you, and that was especially the case before the advent of modern medicine, so humans needed to recognize when they were in the presence of bad food. Naturally, this worked itself into the language, and the phrase the study’s author references is, “Something smells fishy,” which is a phrase found in a number of languages around the world. But how does that sense of smell help us reason better?

Apparently, simply being in the presence of a bad smell triggers our suspicion mechanisms, and makes us more alert on a number of levels, not just an olfactory level. The study tested something known as the Moses Illusion, which involves asking subjects “How many animals of each kind did Moses take on the Ark?” Of course, the story of the Ark involves Noah, not Moses, and so the question itself contains a mistake. Respondents who were in an environment where something smelled fishy as they answered the question were almost 150% more likely to identify the error than respondents in a “normal” environment.

Suspicion on the LSAT is Key

So, how does that help us for the LSAT? First, this story reminds us that the human mind is an incredibly powerful machine, but one that is subject to manipulation. There are steps you can take that either increase or decrease your performance, so pay attention to those elements as you approach the test. Having a strong mental outlook is essential to doing well on the test. Second, the study tells us that you should bring a dead fish to the next LSAT administration. Ok, maybe that’s not a great idea, so we can skip that one. But, what you can do is review some of the many resources we have on test mentality, and make sure that you are doing everything possible to give yourself an advantage.

Here’s a convenient list of some of my favorites:

Those are just a few of our best posts on the subject, and you can find all of our LSAT blogs on Test Mentality here.

So, make sure you take time to prepare your mind to succeed as well as giving yourself the techniques and strategies you need to solve each question. And, maybe before you leave for the LSAT, open your fridge and take out the oldest piece of food in there and smell it. It can’t hurt, right?