You are here: Home / Logical Reasoning / Does the LSAT Test Law? 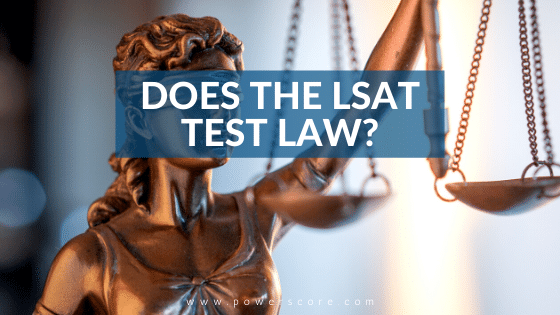 According to LSAC, the Logical Reasoning portion of the LSAT is designed to “evaluate the ability to analyze, critically evaluate, and complete arguments as they occur in ordinary language. These arguments mirror legal reasoning in the types of arguments presented and in their complexity, though few of the arguments actually have law as a subject matter.”

I frequently echo this final disclaimer at the start of my classes. The LSAT is not a legal test per se. Rather, it’s a test of the kinds of reasoning skills students will need to employ in law school. Indeed, the law appears infrequently in Logical Reasoning questions generally. However, if you look narrowly at specific types of questions, it actually appears quite often.

Principle questions are one area of the LSAT that frequently mirror the law and its application.

These questions present you with a principle (or principles). You are then directed to apply that principle to a certain factual situation. The principles themselves can cover a wide range of topics. They usually take the form of abstract rules.

Sometimes they are prescriptive, directing what a person “should” or “should not” do in certain situations. Other times they level judgment as to what is “morally wrong” or “morally good”. But this ethical and moralistic tone can shift to a distinct legal tone. Principles will often speak of “guilt,” “evidence,” and even “intent”. They are often written like laws and, on occasion, even mirror actual laws.

A contract between two parties is valid only if one party accepts a legitimate offer from the other. An offer is not legitimate if someone in the position of the party to whom it was made would reasonably believe the offer to be made in jest.

It is no secret that this principle deals with contract law. After all, the second word in the rule is “contract”. In addition, the rule addresses some of the basic features of contract law, such as “offer” and “acceptance”. But this isn’t just any principle of contract law. The refrain in this rule would sound hauntingly familiar to most current or former students of first-year Contract Law. In fact, part of the opinion in the landmark case of Lucy v. Zehmer, 196 Va. 493; 84 S.E.2d 516 (1954)  reads.

The Lucy case is commonly taught during the first year of law school. For many students, it is straight out of the first few weeks of law school. I even referenced this case straight from my own Contracts textbook. Yes, I still have it. Lucy is famous for introducing an objective standard for determining whether a legitimate offer exists for a contract.

But sure enough, the hook to the LSAT question cited above parallels the objective standard found in Lucy. It does not matter whether the person who made the offer is joking or not. It does not even necessarily matter whether the person to whom the offer was made believes it is a joke or not. What matters is whether a person in the shoes of the person to whom the offer was made would reasonably believe the offer was a joke. These are certainly subtle legal distinctions that pertain to the mindset of the parties to a contract. This isn’t exactly standard fare for the layperson.

The LSAT is fond of sneaking this important legal distinction into many principle questions. The idea that what matters is not just what is actually happening but what the actors believe is happening or even what they intend to happen. Law students quickly become accustomed to this line of thinking as an individual’s mental state factors into so many different areas of the law. However, to students sitting for the LSAT, the significance of one’s mental state is not as readily apparent. Even if a detailed legal understanding of these issues is not required for success on Principle questions, the ability to recognize them is critical.

One more thing is worth noting. Principle questions have appeared about 5 times per test in recent years, representing approximately 10% of Logical Reasoning questions overall. This compares strongly to some of the other more common Logical Reasoning question types. So, as these legal concepts factor into many Principle questions, there is a fair chance of seeing them on any given LSAT.

If you have felt the long arm of the law on Logical Reasoning questions, or if you have any questions about these ideas, please feel free to post those questions or comments below.