You are here: Home / Law School Admissions / Do Law Schools Average LSAT Scores or Use the High Score? 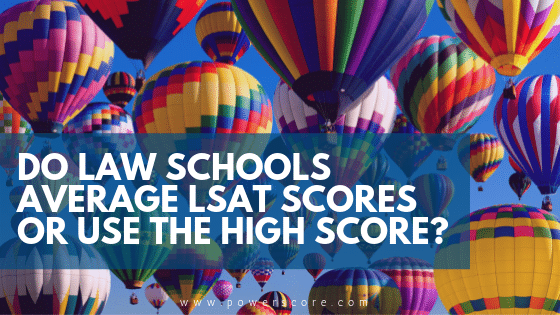 So, what’s the real story?

The definitive answer is good news for all law school applicants. Every law school uses the high score when making admissions decision. We don’t know of any schools that use the average score. That’s easy enough to say, so let’s provide some facts to back up this claim.

Rankings Use the High Score

The USNews rankings are the standard by which law schools are judged. Law schools are required to report only the highest score an applicant receives. Thus, if a school uses just the average score, they place themselves at a significant disadvantage compared to all schools using the high score. That’s an illogical path to take, so on the face of it there’s no sense in taking the average score.

We’ve Talked to the Deans

We have yet to talk to a Law School Dean that uses the average. We’re in a fortunate position to speak with law school deans about various admissions practices. When asked this question, thus far no dean has told us they use the average score. All have stated they use the high score. This covers schools in the T6, T14, T25, and all the way through the rankings.

You May be Referencing Out of Date Information

So what about the law schools that have websites referencing averages?  They explicitly say they don’t only use the high score! This is the one counterpoint that often comes up when discussing this issue. Namely, some schools appear to reference the use of averages (such as NYU), or holistically considering all available scores (like Yale). I’ll let our good friend Mike Spivey from Spivey Consulting explain why schools still reference averages.

“The easiest answer is that we used to average in admissions because all scores used to go to USNews. But around 8 years ago that changed and USNews started only taking the high score. Some remnants of the prior averaging language still exists online, however. In other words, the wording is exactly as it was 8+ years ago. So again that is the easiest answer and simply something that hasn’t been cleaned up entirely online. More deeply, I honestly think some Adcoms almost believe it when they say ‘we average scores.’ What they are really saying, though, is that they SEE all scores (which is true). I think it sounds good to them to say ‘we average’ because it sounds more holistic, and there is sort of a pathway dependency to saying that and hearing others say it over time.

The fact of the matter is this: I know of not a single school, including Yale, that averages. I’ve written extensively on this topic, and the ‘averaging’ myth is the is single hardest falsehood I have had to combat with the hundreds of other law school admissions myths out there, and probably the most damning to applicants that believe it.”

I’m not sure you can get a more emphatic affirmation that law schools use the high score than his statements above. The bottom line is that if you’ve taken the LSAT once and think you can do better, there are few reasons not to retake the test. Of course, keep in mind the limitations LSAC has on retakes, but if you can post a higher score, you increase your admissions chances and increase your chances to receive improved financial aid offers.