You are here: Home / Logical Reasoning / Complex Arguments on the LSAT: How to Be a Major League Player 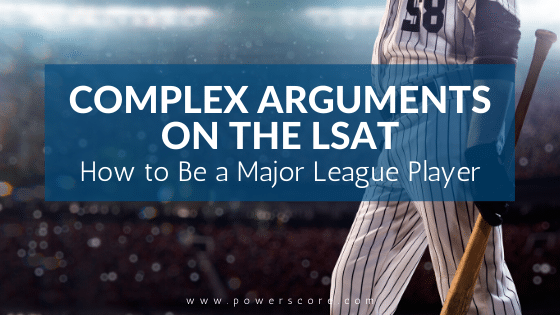 The LSAT often asks you to determine something about a portion of an argument. What was the main point? What role did such and such statement play in the argument? The first question is a Main Point question (no surprise there), and the latter is what we call a Method of Reasoning, Argument Part question.

Both question types are asking something very similar. They want you to pull apart the argument and identify some key component. Was it a premise? Something that the author wants you to disprove? Was it a conclusion? Or something else, perhaps? The arguments in these questions can be fairly complex. It’s easy to spot a conclusion when it comes at the end of an argument and the argument is straightforward with just a premise or two. However, we all know that the authors aren’t interested in making things easy on us. Instead, they often scramble things up, putting the conclusion at the beginning or in the middle. They may include a phrase or sentence that isn’t even a part of the argument! Just additional, nonessential or background information.

One of their favorite tactics in complicating arguments is to include a second conclusion. What we call a subordinate or intermediate conclusion. Two conclusions in one argument? How can that be? It’s just like a moment in America’s favorite pastime. The Double Play in baseball.

Picture this. There’s a runner at first and one out. The game is on the line. Maybe we’re in extra innings and the home team is up by one run. Everything is riding on what happens next. The crowd is on the edge of their seats as the pitcher winds up, throws, and the batter connects with a loud crack! It’s a ground ball heading towards left field! The shortstop dives on the ball, turns, and from one knee fires the ball to second base. The ball lands solidly in the second baseman’s glove has his foot grazes the bag before the runner can get there. He’s out!

Now the second baseman pivots, pulling the ball from his glove as he does. He fires the ball again down the line to the waiting first baseman who’s reaching out, stretching himself to the limit while keeping his back foot on the edge of first base. The batter is running with everything he’s got towards first, hoping to get there in time. But, just before he can step safely onto first, the ball arrives in the first baseman’s glove. He’s out! Double play! The inning is over and the home team wins, the crowd goes wild!

Exciting, huh? But what was are we talking about? Oh yeah, complex arguments with two conclusions.

When evaluating an argument, ask yourself if there’s more than one conclusion at work. Is there something in there that gets some support, then turns and gives support to something else? If so, then you have a Subordinate or Intermediate Conclusion. If you’re asked a Main Point question, don’t pick the statement that both received and gave support! Pick the conclusion that gets all the support and gives none, the out at first. If they ask you about the Intermediate Conclusion, though, be sure to pick the answer that describes something playing both the role of a premise and that of a conclusion. Stay away from the answer that says main conclusion.

Okay, enough of a pep talk. Get back out there and play ball!