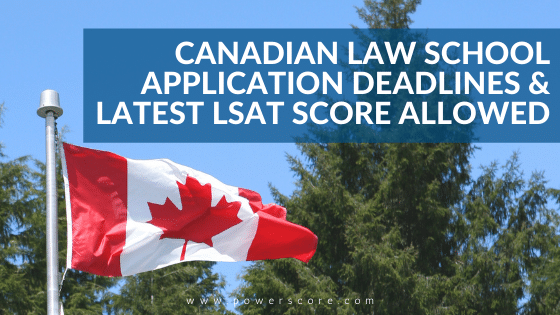 Planning to attend law school in Canada? You may be thinking about which LSAT to take and wondering whether the January or February LSATs are too late. Schools in the US often accept scores from tests as late as July and application deadlines extend into the summer. But that is not the case in Canada.

The majority of the 24 law schools in Canada list January as the latest LSAT they will accept. Application deadlines are generally in November and December, though at least one is as late as March 1st.

Let’s take a look at the list! If you have any questions or comments, please post below. If you plan to apply to any of these schools, we strongly encourage you to contact them directly to ask about their deadlines. The LSAC provides concise descriptions and information including admissions and financial aid requirements for 20 of these schools here: Canadian Law Schools. Note that there are six additional law schools in Canada, but they aren’t in LSAC Official Guide (due to the fact that they are French-speaking schools).

If you need help with any part of your application, we’ve got expert admissions consultants you can work with!

Tune into the newest episode of the LSAT Podcast w