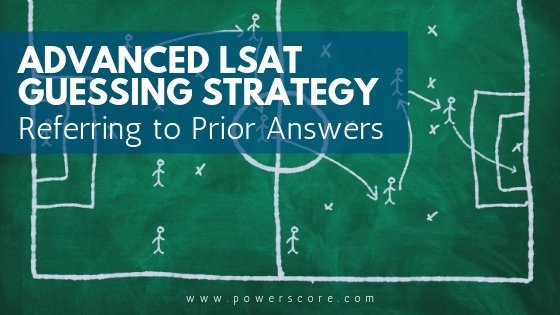 Note that this strategy largely applies to students taking the PAPER version of the LSAT.
The digital format does not give you a preview of your answer choices at a glance.

In a perfect world, you’d never have to guess on any question while taking the LSAT. But, there are occasions where time simply runs out, and when that occurs you have to guess (especially because, unlike the SAT, there is no penalty for guessing on the LSAT). I’ve talked elsewhere about Basic LSAT Guessing Strategy, which is based on answer choice appearance probabilities.

As that article discusses, historically some answers are more likely to appear than others. And you can often gain an advantage by knowing those tendencies when the occasion arises.

Are there other guessing strategies you can employ?

There are, and in this article, I want to talk about one that can be used by high scorers looking to maximize their results. First, to employ this strategy, you must be scoring well already. Or, alternatively, you must have at least one type of section (LR, LG, RC) that you are generally good at. In that case, you can apply this strategy within that section. The prototypical user would be someone who is extremely accurate when answering questions, but who is not quite fast enough to finish all of the questions in a given section (or does not have enough time to return to a question skipped earlier).

Second, to apply this in a given section, you must feel that in the actual section you have been performing well up to the point where you must guess. In other words, you have to feel that you have been answering the questions correctly. With these two points established, let’s discuss the strategy itself.

Refer to Your Prior Answers Within a Section

The strategy involves referring to your prior answers within a section, and looking for the answer letter that has appeared least frequently, and then using that as your guessed answer choice for the remainder of the questions you cannot complete, in that section only. Let’s look at an example to see how it works.

We’ll take the very last section from the October 2013 LSAT. Section #4 of that exam was the second scored Logical Reasoning section of the test. Let’s say you met the criteria above, and planned to implement the strategy. With about 30 seconds left in the section, you had just completed questions number 21 (of 26). You were doing well, and felt very confident in your answers for all of the prior questions. Your scoresheet appeared as follows at that point:

Look at all of the answers from #1 to #21. A quick glance tells you that answer choice (D) hasn’t appeared very often at all (note: all the answers above are correct; this reflects the fact that you can only employ this strategy when are very good at a particular section). In fact, it has appeared only one time. Without taking the time to count, you can easily see that (D) is the least frequently appearing answer choice. In LSAT sections, very rarely is one of the five answer letters simply ignored (has it happened? Yes, but again, it happens rarely).

Thus, as you look at the scoresheet above, up to question #21, (A) appears 4 times, (B) appears 5 times, (C) appears 6 times, (D) appears 1 time, and (E) appears 5 times. Thus, if you have to guess, the likelihood is fairly high that there will be at least some (D)s among the last five answer choices. So, guess answer choice (D) with your remaining time, leading to this scoresheet for the section:

That balances out the number of (D)s in the section. As it turns out, this section actually ended with a D-D-C-D-D run of correct answers. So, by using this approach, you would gain 4 extra correct answers. Not bad!

Will This Always Work?

Will this approach always succeed in this fashion, or this dramatically? No, of course not. There are always exceptions to every rule, and you could run across a section that simply doesn’t feature a certain answer many times. But this is a guessing strategy, not an overall approach to the section, so it is ok to take a chance on something likely to affect such a small percentage of your answers.

You may also run into a situation where all the prior answers are roughly the same in terms of numbers (for example, all of them appear 4 or 5 times). If that occurs, go with your normal guessing strategy choice. Last, this strategy can also be applied if you skip some questions along the way (for example, you might skip a Parallel Reasoning question because it was quite lengthy and you knew it would take a while just to read the question). In that case, if you only have time to blindly guess, simply refer to all of the answer choices you have completed (the ones before and the ones after), and select the letter that has appeared least.

Overall, while this is a strategy that shouldn’t be applied by everyone, for the right people it can at times add valuable points they would otherwise miss out on.