You are here: Home / LSAT Prep / The Rise and Fall of Double-Question LSAT Logical Reasoning Stimuli 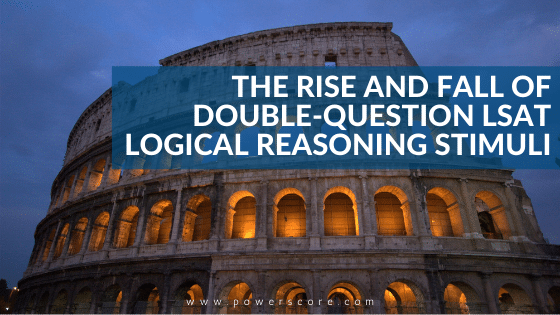 I’ve talked before (notably here and here) about how the content of LSATs changes from test to test. But, there are even changes in the type of question forms you see. For example, in the early 1990s, Justify the Conclusion questions were rather rare, whereas in the 2000s they appeared relatively frequently. In Logic Games, Rule Substitution questions did not start appearing until June 2009. In Logical Reasoning, one question format that used to be very popular—the double-question stimulus—has not appeared in over 10 years. Is it gone, or will it come back?

The double-question stimulus is a single stimulus followed by two separate Logical Reasoning questions. Thus, after you read the stimulus, there are then two different questions that follow that single argument. For example, the first question might ask you to Weaken the argument, and the second question might ask you for what Must Be True based on that argument. There were many other question combinations as well, including Assumption and Method Reasoning, Must Be True and Parallel Reasoning, Flaw in the Reasoning and Strengthen, Weaken and Strengthen, and so on. In other words, you could see almost any pairing of question types.

Then, very suddenly, starting with the June 2003 LSAT, this question format disappeared. And not in the “we only use it occasionally” sense, but rather in the “gone entirely” sense. No released LSAT since June 2003 has contained even one instance of a double-question stimulus (over 50 consecutive LSATs). So, what happened, and is the double-question stimulus format gone forever?

The answer to the first question may lie in the benefits this question format accrued to students. Students generally liked these questions because it was a 2-for-1 timing break; you only had to read a single stimulus, but you were able to answer two questions from that stimulus. This helped you go faster, and to do less mental work. In addition, answering one question typically helped you understand the stimulus better, making the other question slightly easier to answer. Perhaps LSAC felt these benefits were generally too great, and thus decided to stop the heavy reliance on the question format. Does that mean that this question format is dead?

The answer to that question is no. There’s no convincing academic reason to simply eliminate this question format. Instead, this question presentation becomes one of the many tools and devices that LSAC can pull out at any time, and one that will make many students feel slightly uncomfortable (because if they’ve studied only the most recent LSATs, which you shouldn’t do, they will have never seen a question format such as this one). However, more importantly, there is strong physical evidence that suggests we have not seen the last of this question format: multiple relatively recent Logical Reasoning experimental sections have contained double-question stimuli.

The bottom line is that you shouldn’t expect to see a lot of these questions in the future. And your LSAT likely will not contain even one. But there might be one occasionally so acquaint yourself with the format.