You are here: Home / LSAT Prep / What Kind of Vocabulary Should I Expect on the LSAT? 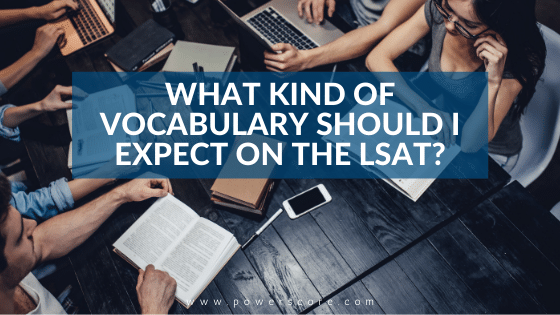 Note: this was originally written for the PowerScore LSAT Reading Comprehension Bible.

Students often ask about the vocabulary required to do well on the LSAT. They worry that they might need an especially large vocabulary, or perhaps a working knowledge of legal or logical terms. Let’s take a closer look and find out what you need to know before you take the LSAT.

Of course, it’s not the simple words that worry most people. It’s the unexpected words, or terms we’ve never seen that cause the most concern. In my view, these types of challenging LSAT vocabulary terms fall into three distinct categories:

Let’s look at each group in more detail.

By “advanced words,” I mean the high-level vocabulary words that you rarely encounter in daily life. Examples (not from the LSAT) would include words such as “tenebrous” 1  or “recondite.” 2 Those are words that you just don’t hear in your general conversations with your friends, classmates, or coworkers! Fortunately, words at this high of a level are extremely rare on the LSAT. Even the hardest general vocabulary words to appear on the test are more on the level of words such as “eschew” or “flouted” (both of which have been used on the LSAT).

Let’s consider the vocab level for a strong LSAT performance, let’s consider what the test makers have to say about the issue. According to LSAC, the producers of the LSAT, “Generally, the selections are densely written, use high-level vocabulary, and contain sophisticated argument or complex rhetorical structure (for example, multiple points of view).3” Additionally, “These questions assess the ability to analyze, critically evaluate, and complete arguments as they occur in ordinary language4.” So, there is an expectation of a high-level vocabulary, but there is no precise definition as to what that means, and certainly no published list of words that constitute a high-level vocabulary.

Should You Study Vocab Lists?

So, should you study a list of hard vocab words in preparation for the LSAT? The answer is no. First, you’d likely be wasting a huge amount of time preparing for words that you most likely wouldn’t see on the test. Second, there is a silver lining when challenging vocabulary is used: in practice, when this happens, LSAT authors generally either define the word or provide sufficient context in the passage to determine what the word means. For example, an LSAT question about scientific discoveries uses the word “serendipity.” What then follows is the definition of that word as “the chance discovery of valuable findings.”

Thus, even without knowing the meaning of serendipity, you could still easily complete the question. In another example, an LSAT question used the word “duplicitous,” but prior to that usage had described the behavior of the individuals in question in a way that made it clear that “duplicitous” meant “deceptive” or “deceitful.” The bottom line is that in most cases when you encounter what would be termed as high-level vocabulary, there will be information around that usage that helps you to understand the meaning of the word.

Specialized terminology can be among the scariest vocabulary you encounter on the LSAT. Seeing terms such as “amygdala,” “thermovoltaic generators,” or “tangible-object theory” will cause most test takers to pause for a moment. However, these types of specialized terms are beyond the general vocabulary of almost every LSAT taker. Thus, LSAC does not presume you will know the meaning of such terms. In each instance, they supply a definition in the passage (as in all three instances mentioned above). While this definition is often in the immediate vicinity of the first appearance of the word, in some cases (notably in Reading Comprehension) the definition is provided a number of lines later. Regardless, when you see terms of this type, start looking for the definition that will almost certainly be provided (and relax, because you won’t have to guess at the meaning of the word).

Note that one of the common tricks of the test makers is to place an ominous looking word before a more commonly understood concept. For example, when the phrase “Streptococcus bacteria” was used on the LSAT, no definition was given. Of course, the test makers expect everyone to understand the basic ideas behind bacteria. And the question itself did not hinge on any specific knowledge relating to Streptococcus. Thus, there was no need for a specific discussion of that particular type of bacteria.

While the LSAT does not require you to understand specific terms from the scientific, medical, technical, or legal worlds, many LSAT questions hinge on your knowledge of certain words or phrases that are part of the logical canon of the test. The specialized logic terms aren’t the majority of the words that present problems are not, however. As LSAC notes, “The questions do not presuppose specialized knowledge of logical terminology. For example, there is no expectation will know the meaning of specialized terms such as ‘ad hominem’ or ‘syllogism.’” 5

Instead, the words and phrases that cause problems on the LSAT tend to be those that are defined in a way that differs from their more common, “real world” definitions. These words, such as “some” or “either…or,” appear innocent but can cause serious problems if misinterpreted during the exam. Because even a single missed question can drop your scaled LSAT score by one point. Thus, LSAT students must know the exact definitions of the logical terms that LSAC uses frequently. To that end, we offer a free LSAT vocabulary quiz in our LSAT Free Help Area. Within the PowerScore LSAT courses and our LSAT books we discuss the terms on this quiz, as well as many others, so take the quiz and see how you rate!


The bottom line is that the  LSAT is not a direct test of your vocabulary. But there is an expectation that you have at least a solid vocabulary. And that you understand the usage of certain common terms such as “conclusion” or “correlation.” You do not have to worry about knowing very specialized terminology, and the definitions of high-level words you do encounter will often be easy to deduce based on context. So, put away that vocab list and instead spend your time studying argumentation and Logic Games!