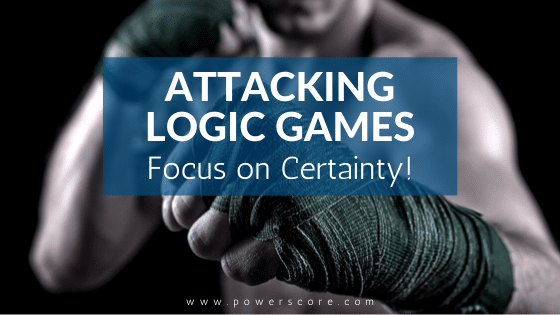 Understanding Global and Local question strategies in Logic Games is difficult. Dave’s blog post on the subject got me thinking about recent conversations I’ve had with students on similar topics, primarily with respect to efficient inference making and question attack. So I’m going to supplement his insights with a few of my own.

We focus a tremendous amount of time and attention in our courses and books emphasizing the fundamental importance of making correct inferences in Games: determining the various truths of the relationships between variable sets. In making inferences, what we’re really focused on is establishing notions of what I’ll refer to here as positive and negative certainty. That is, determining what must occur in an absolute (consistent) sense, and what cannot occur in an absolute sense. So we focus on establishing truths like “X must be selected 4th,” or “X cannot be in Group 3,” and we concern ourselves less with uncertainties, like “X could appear in any of the first five spots.” The reasoning behind this is really two-fold:

1. Most Games inherently contain a tremendous amount of uncertainty about the specific placement/arrangement/grouping of variables. Attempting to resolve all of that uncertainty or represent it in a meaningful way would simply take too much time.

2. “Certainty” in terms of what is absolutely true or false (extreme limitations) is easier to identify. It ultimately controls the Game to a much greater degree than the uncertainty.

Applying the Concepts to Questions and Answer Choices

What often gets overlooked, however, is that the notion of certainty vs. uncertainty extends beyond just the setup, and into our examination of the questions and answer choices as well. When people encounter a Must Be True question in Games, it is generally pretty apparent that they must find the answer choice that represents a universal, consistent truth. In other words the correct answer choice is inherently certain. With that in mind, test takers should move aggressively through the options until an answer appears immediately, unavoidably correct. Don’t waste time debating the merits of A. If A isn’t clearly correct move on to B, C, etc. Act with confidence that the correct answer, based on its consistent and absolute nature, will stand out from the others.

But what about a Could Be True question, where the correct answer choice is itself an uncertainty? Fortunately, in instances where the credited choice is not an absolute, the four incorrect options are absolute! Take that Could Be True situation and consider the four wrong answers. Each one is incorrect because it CANNOT be true (it is absolutely impossible). And because certainty is almost always easier to identify and understand than uncertainty, it is often easier when faced with a question of that nature to examine the answers for why they are incorrect, instead of searching for the correct answer that contains variability, a harder idea to pin down.

Devote Your Time to Absolutes

As you continue to practice with Games keep in mind that absolutes and certainty should be your primary focus. The notion of attacking the absolutes extends even into the questions and answer choices. Devote more time and attention to the absolutes in Games and worry less about what cannot be determined with certainty. You’ll see an improvement in both speed and accuracy, from your initial inferences all the way through the questions.