You are here: Home / Law School Admissions / Hoping to Apply to Law School Early? What Actually Is Early? 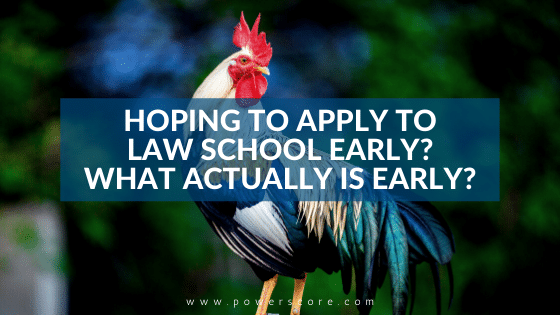 Many people know that law schools use a rolling admissions process, which means that schools consider applicants in batches as the applications arrive. Thus, when an application comes in at the beginning of the application period (in the fall of each year), there are the fewest number of competing applications completed and the greatest number of available spaces in the class.

As time goes on, more applications come in. Towards the end, there are the greatest number of applications completed but far fewer spaces remaining in the class. Thus, there is a significant advantage to applying as early possible, and many students try to get their applications in early.

But, what actually is “early” in comparison to other applicants? In reviewing one recent admissions season, LSAC produced a chart that showed how applicants applied over time: 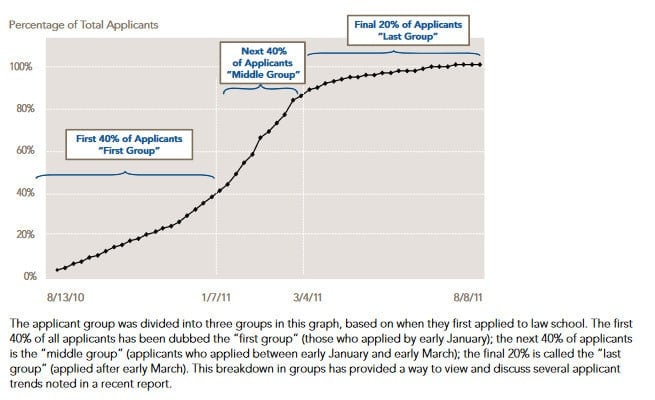 The chart divides the applicant group into three groups:

Let’s look at some of the details of each group:

From the opening of the law school admissions window in the fall through early January, 40% of applicants put in their first application. However, there are some notable milestones along the way:

After early January, the pace of applications accelerates significantly as deadlines loom. By roughly January 15th, about half of all applications have been submitted. Anyone applying after this point is now facing the bulk of their competition for a space in the class.

So, what lessons can we draw from all this data? First, if you take an early LSAT and complete your applications by early September or so, you will be facing only 10% of the other applicants. That’s a huge advantage for June test takers!

Second, most October LSAT takers use the remainder of the fall period to finish their apps after taking the exam. So, if you take the October LSAT and can finish all your paperwork prior to your score release, you can still get a strong early application advantage. If you can’t finish your paperwork by the end of October, you still will have an advantage if you can complete everything by the end of November.

Third, even if you can’t finish your apps by September or November, you still gain an advantage (albeit a much smaller one) if you can get your applications in by mid-December. After that point, applications begin to really pour in, and the admissions office is so swamped that there isn’t any further time advantage to be gained (mainly because, well, it isn’t “early” anymore!). So, if your applications won’t be completed until after January 1st, don’t rush to complete them; instead take the time to make sure they are as good as possible. That’s a useful piece of advice at all times, actually.

Have further questions about early admissions? Please post your questions in the comments section and we are happy to answer them! If you want help during the admissions process, we have expert admissions at the ready. From your brainstorming your Personal Statement or running through the whole process, we can help.