You are here: Home / LSAT Prep / Accommodations for the LSAT Part V: The Controversy Continued, DOJ Joins the Party 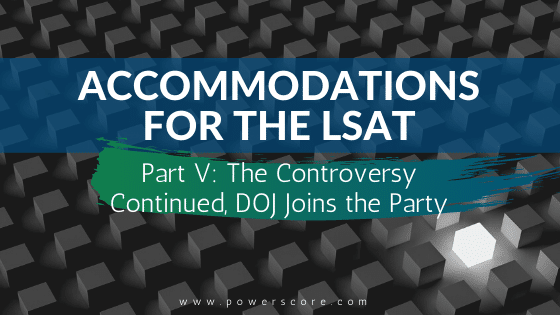 Part 1 of this discussion dealt with a case that LSAC filed in response to recent California legislation regarding the issue of “flagging” LSAT scores (distinguishing the score reports of those with special accommodations from those who take the LSAT under standard conditions). In that case, LSAC was successful in its challenge to the brand new legislation, but then later agreed to stop the practice. Part Two deals with a major cases filed against LSAC.

The DFEH and DOJ Consent Decree

The Justice Department announced in September 2012 its intent to intervene in a case that began as a California-based class action, alleging various violations of the Americans with Disabilities Act (ADA), including “widespread and systematic deficiencies in the way it processes requests by people with disabilities for testing accommodations for the Law School Admission Test.”

1)     That LSAC turns down the requests of many applicants, in many cases despite well-documented certification and histories of accommodations; and

2)     That the practice of flagging accommodated test scores identifies those with disabilities. This is a disclosure of confidential information which, the Justice Department alleges, amounts to discriminatory behavior prohibited by the ADA.

The Assistant Attorney General of the Civil Rights Division of the Justice Department called the Department’s participation “critical to protecting the public interest in the important issues raised in this case.”  Among the victims identified in the initial complaint was a student who, despite a long term and well-documented visual impairment, was denied several requested accommodations which included a large print book.  Another victim specified was a well-documented dyslexic who was denied extra time but provided with no explanation for the denial. In October 2012, the DOJ request to intervene was granted in the case of The Department of Fair Employment and Housing v. LSAC et al.

Eventually, in 2014, the DOJ, DFEH (California’s Department of Fair Employment and Housing), and LSAC came to terms and signed a Consent Decree. The Consent Decree compelled LSAC to pay $7.73 million in penalties and damages. And, it required a significant change their accommodations review process, and including the elimination of flagging of accommodated scores.

As a result of the decree, LSAC made significant changes to their accommodations process, which helped thousands of applicants. The process became faster and clearer. There was further controversy, however, as the DFEH and LSAC sparred for several more years. For example, this complaint, this brief, and this order, among others. LSAC was found in contempt of the original decree by the courts, and again ordered to pay attorney’s fees. The order also extended the original consent decree by two more years, into 2020.

In 2017, Angelo Binno and Shelesha Taylor sued LSAC over issues related to Analytical Reasoning (Logic Games) and sight impairment. The claim was that the requirement for sight-impaired individuals to take a section that relies on diagrams is a violation of the ADA. This suit was resolved amicably by the parties in 2019. Accordingly, the agreement looks to find additional accommodations for sight-impaired test takers and contemplates a future LSAT without Logic Games.