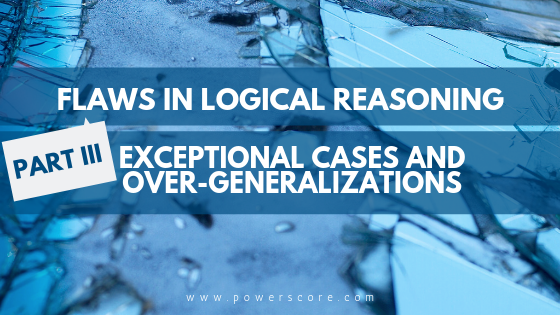 Before continuing with Part Three of our Flaws in Logical Reasoning series, let’s review the importance of understanding argumentative errors. Here’s how I began the series when we looked at Source Arguments:

Now let’s turn our attention to another mistake that LSAT authors (and real-world people) make with some frequency.

A stimulus with this flaw typically presents a small number of instances (maybe a single case, but never more than a few) and treats those instances as though they substantiate a broad, often sweeping, conclusion.

The error in that type of argument stems from a fundamental truth of valid conclusions. They can never be more strongly worded or absolute than the evidence given in support of them. Observing a single instance of some events is not enough evidence to conclude that that event “always occurs,” or “is likely to occur” similarly in the future any more than the individual absence of an event would be enough to justify a belief that the event “will never occur,” or “is rare.”

The Ladder of Increasing Certainty

Sometimes I envision this idea as a ladder of increasing certainty. The lowest rungs are reserved for ideas of mere possibility (“could occur,” “may be the case,” etc.) As we climb we find ourselves reaching heights of greater restriction, and thus greater certainty in our beliefs. Above possibility is likelihood (“it will probably be the case,” “this will usually occur,” “rarely will we find,” etc.)

Only at the top rungs do we reach our absolutes. This is where our evidence is so persuasive, so strong, that we feel confident in making claims with extreme language (“it is the case that,” “this will occur only when,” “we can expect a complete absence of,” etc). We were able to climb to that height of certainty only because we had sufficient support to hold us up. Occupying a height below the last rung of evidence is easy. If I can prove something is nearly guaranteed to occur, I can confidently say it’s possible. I simply cannot continue to safely climb above it.

Language in an Argument

I want to pause briefly here to make something very clear. This idea of recognizing the strength of language, and its limiting effects on an author’s conclusion, is one of the most crucial considerations you must make for EVERY stimulus! You must view all through this lens. Contemplate the scenario described by the author and the nature of the words used to describe it. The author chooses a language that dictates exactly what is and is not reasonably supported. That aspect of this discussion transcends our look at common flaws. It should be a primary concern regardless of the specific stimulus or question type. Must be True questions serve as an example of the broad applicability of this concept. The answer that has more extreme language than the premises in the stimulus allows is a common answer choice trap.

Exceptional Case/Over-generalization Arguments on the LSAT

Of course, our purpose in this post is to look a this specific argumentative error. So, let’s get back to the task at hand. What exactly might an Exceptional Case or Over-generalization flaw look like on the LSAT? Consider these examples:

In either case, do we have enough evidence to draw those conclusions—“take your car there and they’ll overcharge you” and “smoking isn’t bad for my/your health”—with language that absolute? No, of course not. Granted, the first conclusion seems a little more reasonable than the second, but we’ve got only a single instance in both examples…not nearly enough support for an argument that strong.

When the Going Gets Tough

Granted, those aren’t the most elaborate examples to work through, but they do illustrate the underlying idea and that’s what is fundamental to your ability to succeed when things get trickier. And the good news is that, just as the error is hopefully easy to recognize above, so too will it be easy to see on test day.

If you do spot an argument where the conclusion generalizes beyond the evidence provided, you’ll want to be able to quickly scan the answers for one that describes this flaw. Here are a few examples of how that description would appear on the LSAT:

A final point about arguments of this type: this is a very specific type of mistake and follows from a very consistent construction, so unless you see a generalized (broad) conclusion following a limited number of instances, do NOT pick an answer like those above. They are very commonly presented as traps following stimuli with other reasoning errors; in fact, answer choices describing this error are more often incorrect traps than they are correct, so be wary when you inevitably encounter them.

Strive for achievement, even in the smallest thing

"Happy Friday! What's the flaw in reasoning in thi