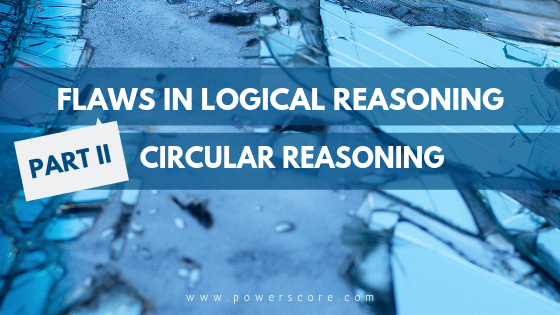 Before we continue examining common flaws in LSAT LR questions, let’s review the importance of understanding these argumentative errors. Here’s how I began the first post in this series, where we looked at Source Arguments:

Circular Arguments and How to Spot Them

With that in mind, let’s turn our attention to another type of mistake authors make with some frequency: Circular Arguments. Occasionally referred to as “circular reasoning,” these arguments commit a singular, recognizable error that the author’s stated conclusion (belief) is supported primarily, or exclusively, by a premise that is the same as the conclusion. In other words, the author assumes as true (gives the premise as a truth) what is intended to be proven (the conclusion). This is a somewhat tricky idea to grasp in the abstract, so let me give you a simple example of what this might look like:

“The New England Patriots are the best football team because they’re better than the other teams.”

Do you see the restatement of just one idea in both the conclusion and its premise? When constructing an argument, the author gave the premise as factual and attempted to draw a valid, fully supported conclusion. So, the conclusion must follow from the premises. But, if I’m trying to prove that “the Patriots are the b est,” I need to provide actual evidence for that belief rather than simply saying it’s true in a premise. That’s how circular reasoning works. The conclusion given is based on an identical premise, which the author believed without evidence. The “circularity” is based on the idea that when you question the conclusion, the author points to the premise. Then, when you question the belief in that premise, the author gives you the conclusion. This can go on forever without any actual evidence to show the truth of either.

See if you can spot the circularity in another example:

“I must be telling the truth, since I’m not lying.”

How would you know I’m telling the truth? Well, according to me, in this example, it’s because I say I’m not lying. But, you have no reason to believe the premise (not lying) any more than believing the conclusion (telling the truth).

Circular Reasoning on the LSAT

If you spot an argument where the conclusion is synonymous with one of the premises, and no evidence has been given to show that the premise is correct/true, you’ve got a circular argument. At that point you can quickly scan the answers for one that describes the author presuming to be true the thing he/she is attempting to prove.

Here are a few examples of how the test makers describe circular reasoning:

Notice in each of these the author mistakenly believes something to be true in a premise, when it is that very thing he/she is attempting to prove in the conclusion.

A final point about circular arguments: because most test takers don’t really understand what a circular argument is, answer choices like the ones above are very commonly presented as traps following stimuli with other reasoning errors. That is, you’ll see circularity described as the flaw much more often than you’ll see circularity appear in the stimulus. People pick this answer choice because they don’t truly know what it means, but don’t make that mistake! Only if you see the restatement idea discussed above should you choose an answer choice that suggests circular reasoning.