You are here: Home / LSAT Prep / Accommodations for the LSAT Part IV: The Controversy of Score Flagging 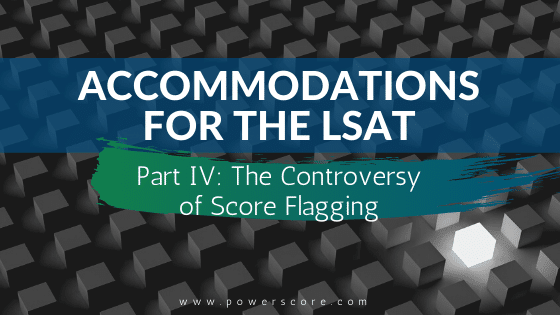 The issue of accommodated testing is a challenging one for many reasons. From the thousands of requests that the Law School Admission Council receives each year, the council must determine, on a case-by-case basis, which applicants should get accommodations, and what accommodations are appropriate. Over the past few years these issues have been getting more attention, as the council has defended a number of lawsuits based on claims about how the LSAC deals with such requests.

One particularly controversial issue concerns LSAC’s practice of distinguishing test scores achieved under accommodated conditions. This practice is known as “flagging.” Years ago, California passed legislation specifically banning LSAC from flagging students for whom special accommodations were authorized. Within days after the bill went into effect in January, LSAC filed suit in objection to the brand new legislation. LSAC’s complaint was based in part on the fact that the law singled out the Council, despite the fact that the LSAT is not the only standardized test whose special accommodation scores are flagged. Additionally, LSAC asserted issues of free speech; arguing that the council has a legitimate interest in providing schools with the most accurate information available.

The California court’s initial ruling: a preliminary injunction on enforcement of the ban. So, at that time, LSAC’s practice of flagging legally continued. The court said the ruling was based on the very specific nature of the new legislation. While the state lawmakers should seek to protect against discrimination, the judge ruled, legislators should not so specifically target a single entity without a very good reason for doing so.