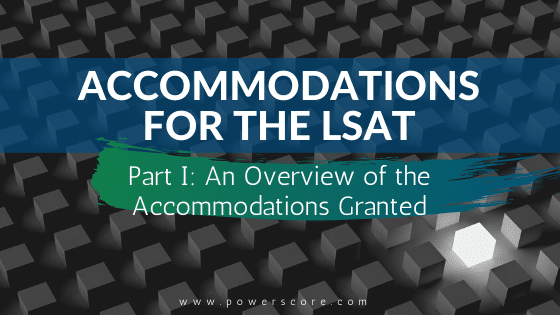 So, what are these altered circumstances? It depends on the nature of the disability, but the accommodations include the following: Taking the test in regular print form; taking it in large, 18-point-type print; or taking it in braille. A non-scannable answer sheet is also available. Depending on the nature of your condition, other accommodations may include the use of a reader, an amanuensis, a wheelchair-accessible test center, additional rest time between sections, a separate or additional testing time (source). There are also many other accommodations available as well.

In some cases the accommodation need is obvious. An individual with a visual impairment might need a larger font LSAT, or may need the LSAT in Braille format. Or, to cite another example, it makes sense that a diabetic individual would need access to medication. However, two accommodation types are the ones that often engender the greatest interest from students interested in accommodations. There are additional rest time between sections and additional testing time. Let’s look at those two items in more detail.

During a normal LSAT administration, there is a very short break between most of the sections. Thus, there is no time to leave the room or move around between most sections of the LSAT. With this accommodation, the test taker receives a lengthier break between each section. So, instead of 15-30 seconds between sections 1 and 2, an accommodated test taker might get 5 or 10 minutes. Who might need such an accommodation? Well, one former student of mine was a retired police officer who had been shot in the lower back while chasing a suspect. While she was still able to walk, the injury made sitting for extended periods of time uncomfortable, and thus she was able to use the accommodation time to stretch and regain circulation.

This is the accommodation that often creates the most interest. Test takers with this accommodation receive additional time to complete each section of the LSAT. How much time? It might be 5 minutes, or 10 minutes, or more. “Time and a half” is a frequent request, as is “double time.” However, because having any additional time is such an advantage, LSAC is very careful about who is granted extra time accommodations (in other words, just asking for it won’t get you extra time; there is a series of documents that must be completed, doctor evaluations, etc., and even then LSAC must approve all of that paperwork). The list of disabilities that might result in extra time is long and varied, but include OCD, ADD, ADHD, dyslexia, learning disabilities, and anxiety disorders.

So, the takeaway is that if you have a documented disability, there are mechanisms in place that can result in accommodations to make your test experience comparable to that of other test takers. However, in order to gain these accommodations, you often have to go through a fairly lengthy application process, which we will discuss in the next part of this series.