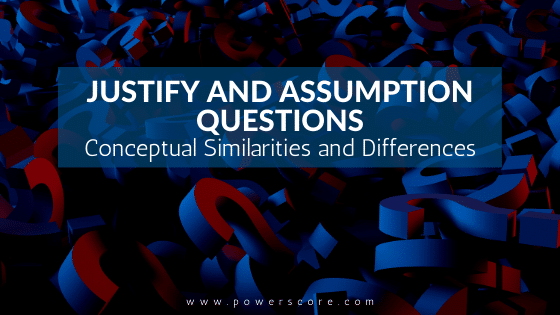 Many students confuse Justify and Assumption questions. Of course, this is not news to those whose job is to confuse you (hint: they work in Newtown, PA). Consequently, you will often encounter Assumption decoys in Justify questions and vice versa. The trick is to know what you are looking for. And what you are not.

Let’s work through a simple argument and examine what a Justify answer would sound like.

Conclusion: Jane will be admitted to Harvard.

To justify this conclusion, it is sufficient to say that “Everyone who gets a 173 on the LSAT gains admission at Harvard” (i.e. 173 → Harvard). Other examples of Justify answers might include:

These examples all conform to the following structural paradigm:

In the Justify answers listed above, none of these statements would be necessary for the conclusion to be true. The conclusion would be logically valid even if they weren’t true.

To identify an assumption, ask yourself, “What is the least I need to establish in order to ensure that this argument is valid?” In a way, an assumption is an inferential statement. We can prove it by referring to the argument contained in the stimulus. So if the conclusion of the argument is true, its assumption(s) must be true as well.

Examples of assumptions for the above-mentioned argument might include:

These examples all conform to the following structural paradigm:

In other words, the statements we just listed must be true if the conclusion that Jane will be admitted to Harvard is true. Indeed, some test-takers find it easier to conceptualize Assumption questions as part of the First Family (i.e. “Prove”-type questions), because the assumption statement can be proven by the information contained in the stimulus.

Some students struggling with the distinction between Assumption and Justify questions might attempt to relate the conditional relationship in the argument to the conditional relationship between the answer choices and the stimulus. The two have virtually nothing in common. The substantive logic of an argument may or may not contain conditional reasoning. That is unrelated to understanding the underlying conditional structure between the answer choices and the conclusion in Assumption and Justify questions.

Harvard does not admit anyone without a top-1% score. Jane just took a PowerScore class, and everyone who takes a PowerScore class is guaranteed a 173. Therefore, Jane will gain admission to Harvard next year.

Conditionally, the argument can be diagrammed as follows:

Now, we know that Jane is guaranteed a score of 173, and Harvard requires a top-1% score for admission. Clearly, the conclusion assumes that 173 is a top-1% score. If it weren’t, then Jane would not be getting into Harvard given the law school’s requirement:

This statement is not sufficient, of course, to prove the conclusion. Even if 173 were a top-1% score, that would only establish that Jane has satisfied a requirement necessary for admission into Harvard. Indeed, for us to prove the conclusion, we need to state that a score of 173 is sufficient to secure admission into Harvard. In effect, this makes the first premise of the argument into a bi-conditional statement:

As you can see, many Assumption and Justify questions require you to find the missing link between a premise and the conclusion. This is why the two question types are conceptually similar. But the way in which the correct answer choice attempts to link the conclusion to the premises varies significantly between them.

Visit our forum for more discussions on this topic!