You are here: Home / Law School Admissions / Using Rankings to Decide Where to Apply to Law School 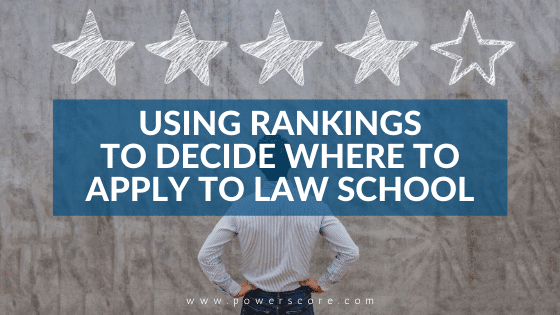 Rankings are everywhere. Whether it’s law school, business school, college, or even high school, chances are there’s someone out there who’s come up with a ranking system. Their sheer ubiquity means that rankings are the one aspect nearly every applicant consults when making application decisions. These numbers certainly have their use, particularly at the start of the selection process when you need solid indicators to help you narrow down your choices. However, it’s useful to know a few things regarding rankings and their usage.

Rank Does Not Equal Quality

Although the schools in the “top” of the U.S. News & World Report rankings are good schools with great reputations, this doesn’t mean schools in the lower rankings are deficient or less worthy of consideration. Rankings don’t take into account specific and unique attributes of the law school programs they rank. They also don’t take into account how these unique qualities may fit for a particular applicant. Concern yourself with which schools are the best for you, not just those with the best ranking.

Also keep in mind that the U.S. News rankings base a large chunk (40%) of each school’s rankings on “assessments” by peers, lawyers, and judges. What does this mean? Almost half the weight of a school’s placement within the ranking comes from a completely subjective score people in the industry give it. Tangible items such as job placement, return on investment, or ability to pack back education loans post-graduation aren’t in that score. Remember that program popularity plays a large role.

The U.S. News rankings, while the most popular, are not the only rankings to explore. There are various other “methods” out there including Brian Leiter, TopLawSchools and even other law schools. Many people and companies get into the law school rankings game, which means that there are many at your disposal. Use as many of them as you can in order to get a broad picture of each “rank” as possible.

They Are a Business

Taking these numbers to heart when making school decisions can be a risky move. It is important to remember a few things.

Schools can, for example, inflate their rankings by only accepting students with UGPAs and LSAT scores above a certain number. Schools know how to affect their ranking. Students should be aware that these scores do not happen in a vacuum and that schools can manipulate them, even slightly. Although this can end up with positive results for the applicants, it is worthwhile to note that schools can significantly affect these numbers. This means they are widely subjective, so keep that in mind!

It’s Not an Exact Science

The 2009/2010 U.S. News/Brooklyn Law School debacle proves mistakes or inaccuracies can definitely happen. In addition, what U.S. News considers unimportant or less important, might be something that you consider extremely important. For example, let’s look at the methodology U.S. News uses to rank law schools. They count “Assesment Scores,” or how people in the law school business sees a particular law school, as 40% of the overall ranking! They only count “Placement Success,” or the number of graduates that secure a legal job post-graduation at 20%. Ask yourself: Which is more important? How the Dean or professors of other law schools view a school or the likelihood of you getting a legal job after you graduate? Most students are likely going to weigh the latter more highly.

The Ranking Systems are Sensitive

Rankings can change often, and sometimes dramatically, over the course of a single year. Slight minutia can have a large impact! The most widely-used systems take into account “public perception” as the most significant percentage of their formula. This means that a shift in public opinion can alter the ranking significantly. This breakdown is not meant to discount the importance and usefulness of rankings, however it is a cautionary tale. Be careful of taking rankings at face value. Instead, take them with a grain of salt. If you use them, use them carefully, sparingly, and at the start of your research. Don’t use them as a deciding factor in your decisions!

Not sure how to come up with a decision? Here are some guidelines.

Rankings definitely have their place in the admissions and application process, just be wary of turning them into the linchpin of your application decisions.