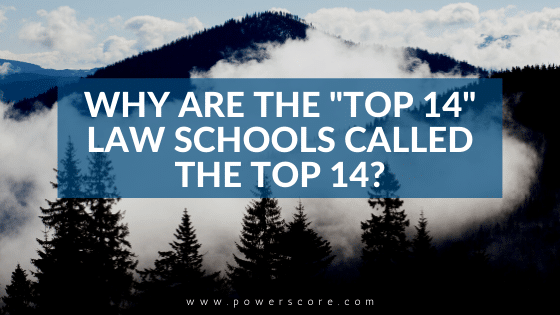 A lot of chatter surrounds the excellence of the “top 14” law schools, also known as the “T14”. However, many current students and law school hopefuls don’t know why they are called “top 14”. They must be the top of something, right? So what are they the top of?

Why did the T14 denomination take over? One potential reason is the remarkably minor change in the overall composition of this elite group over the years. While schools sometimes move around within the T14, it is rare that one drops out of it. It is even rarer that a “non-T14” breaks into this select group. For the most part, the schools in the T14 are always the same ones. This made it easy for the T14 reference to gain traction and stay relevant even 14 years after the first USN listing went to press.

The Law Librarian Blog has a great chart that tracks the ups and downs of schools within the T14 from 1987 to 2009, particularly focusing on the movement in and out of the top 10 (unfortunately, it has not been updated to include the 2010, 2011, or 2012 rankings).

As you can see, there is remarkably little change even within the T14 rankings themselves. The top school has always been Yale, and the #2 and #3 spots have gone, for the most part, to Harvard and Stanford (with the exception of 1997, when UChicago Law snuck into the top 3, ousting Stanford for a season). Yale Law, in fact, is allegedly so far beyond Harvard and Stanford as per the the rankings’ methodology that, unless something drastic were to change within the way things are calculated, it is doubtful that it will ever be overtaken by either.

For the most part, the rest of the schools are somewhat fluid within the top 14 spots, although there are some exceptions: Since 1999, the top five schools have remained the same (Yale, Harvard, Stanford, Columbia, NYU–except for the 2011 rankings, where UChicago bumped NYU down to #6), and the sixth spot has been taken mostly by UChicago, although UC Berkeley has sometimes made an appearance.

So, there you have it, folks. That’s why the top 14 law schools have that name.