You are here: Home / Law School Admissions / Is it Okay to Embellish My Law School Application Personal Statement? 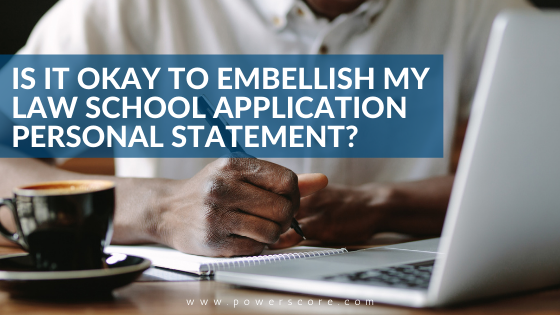 Short answer: No. The long answer? Law school prepares you to serve as an advocate and representative of the legal system. You will be expected to abide extremely high ethical standards throughout your career. Misrepresenting yourself on your application sets an awfully poor precedent. If an appeal to ethics doesn’t convince you enough, let me demonstrate how embellishment is strictly against your own self-interest. When considering a risky decision, there are at least three questions you should ask.

First, the reward for success is not very high. Admissions committees must create a certain kind of student body set by their law school deans and have very specific ideas of whom to admit. They are not necessarily looking for the person with the biggest trophy case or most bullet points on their resume. After all, winning the state championship in softball does not impress the committee any more than finishing last in your division. Both experiences demonstrate hard work, commitment, teamwork, and time management skills. The committee might be pleasantly surprised to read a personal statement about someone who played on a terrible team and stuck with it anyway.

Also, your personal statement is primarily about who you are rather than what you’ve done. If you lie about who you are, you might end up with admission to a school that’s not a good fit for you. If the school is a good fit, then you shouldn’t have to embellish. The committee will be able to recognize that you are the kind of student who belongs at XYZ Law School.

Second, the cost of failure is inordinately high. You will receive immediate rejection without any chance for appeal if they find out you misrepresented yourself in any way on your application. This includes your resume, letters of recommendation, and any acts which should have been disclosed but were not. And believe me when I say that admissions committees from various schools love to talk to each other about the outrageous things their applicants do or say. There is a very good chance that you would be blacklisted from the schools to which you applied.

But it could be even worse. Imagine that you were accepted and your embellishment was not discovered until your second or third year. The school would be likely to expel you immediately, and the reason would become a matter of official record which may permanently bar you from attending any other school or sitting for the bar or practicing law. And student loan debt rarely receives forgiveness. You would probably end up paying for a partial education that you would never be able to use.

Finally, the likelihood of failure is higher than you might think. Admissions directors with whom we have spoken assure us that they frequently spot check applications. One director of a top 20 school says that he calls at least one recommender for every admitted student and confirm that they did, in fact, write the submitted letter.

Although a personal statement won’t likely receive the same type of review, it is at least possible that an admissions committee could detect falsehoods or hyperbole. After all, each member reads hundreds of personal statements a year.

Also, your embellishment might be exposed in some completely unexpected but mundane manner. If I claimed to be first runner-up in a local chess tournament, one of the committee members might know the organizers of that tournament. Or perhaps the person who was really runner-up that year might apply to the same school and include that achievement in their application.

The point is, when the cost is so high, it makes almost no difference how unlikely failure is. The choice is still unacceptably risky because the potential impact is overwhelming.

Which brings us back to the original question. Is it ok for me to embellish my personal statement, even a little, especially if no one will ever find out?