You are here: Home / Logical Reasoning / The Genesis of an LSAT Question, Part II 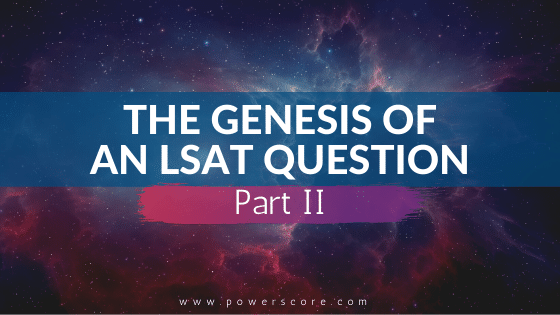 Continuing on with our discussion from Part I, let’s take the text from the article and turn it into a proto-LSAT Logical Reasoning stimulus:

“In the country of Downlandia, over 100,000 people currently live in towns with populations of fewer than 100 residents. This is an increase of over 20,000 people from a decade ago.”

With this very rough “stimulus” in hand (which at this point is just a fact set), we can examine the three question types that could easily be appended to the scenario. In each case we will add a bit more to the stimulus in order to make the question work properly.

To create a Weaken question, we must add a conclusion to the stimulus:

“In the country of Downlandia, over 100,000 people currently live in towns with populations of fewer than 100 residents. This is an increase of over 20,000 people from a decade ago. Clearly, urban areas are experiencing decreases in population as more people are moving to small towns.”

Note that the added conclusion contains several elements, two of which are problematic:

“In the last decade, many small towns experienced population decreases, placing them in a new size classification.”

This answer does not explicitly reference the 100-person mark. Nonetheless suggests that more towns now fall into that very small town classification. This suggests an alternate cause similar to the one suggested by the author of the original article. An alternate cause is a classic way to undermine a causal conclusion, and this answer choice would be correct. But it might also be difficult to spot at first glance.

Let’s see how the situation changes as the question type changes to Assumption.

For this question type, let’s use the stimulus we created in the Weaken question example:

“In the country of Downlandia, over 100,000 people currently live in towns with populations of fewer than 100 residents. This is an increase of over 20,000 people from a decade ago. Clearly, urban areas are experiencing decreases in population as more people are moving to small towns.”

Now, let’s imagine that instead of a Weaken question, the stimulus is attached to an Assumption question. In that case, we might see an answer such as the following:

“In the last decade, no small towns experienced population losses that placed them in a new size classification as compared to the past.”

This answer, which is a variant of the opposite of the Weaken answer, would also be difficult to spot because at first it appears to be irrelevant to the argument of why the overall population of small towns has increased. But, this is exactly how Defender Assumptions work, and a negation of the answer shows that it can attack the stimulus:

“In the last decade, some small towns experienced population losses that placed them in a new size classification as compared to the past.”

Finally, let’s look at how a Resolve question stem might affect the correct answer choice.

“In the country of Downlandia, census reports indicate that over the past decade, the total population of very small towns—towns with 100 or fewer people—has increased by more than 20,000 people. Currently over 100,000 people now live in such towns. Oddly, despite the fact that Downlandia’s overall population did not change significantly during the last decade, urban areas have also seen population increases during this time.”

Note that in revising the stimulus, we removed the conclusion and presented a new fact, namely that urban areas also saw population increases. This partially removes the obvious explanation for the increase of small town population (that people moved from urban areas to small towns).

With that change to the stimulus, our correct answer might appear as:

“In the last decade, many small towns experienced population losses that reclassified them into the very small town size classification.”

Find Examples of Your Own

Of course, we’re not suggesting that the above stimulus will appear on a future LSAT. So what’s the lesson to be drawn from this discussion? The broad lesson is that the raw material for the LSAT is everywhere around us. As you read the news (or a magazine, or any article) consider what you are seeing and how it could be turned into a question. You won’t likely see a future LSAT question based on the situation you are looking at, but your powers of analysis and your general understanding of the various options the test makers have will increase, and that will make you a better LSAT taker.

Good luck, and feel free to post any similarly interesting scenarios you see. I’ll comment on the best ones.