You are here: Home / Law School Admissions / Should I Apply to Law School This Year or Wait ’til Next Year? 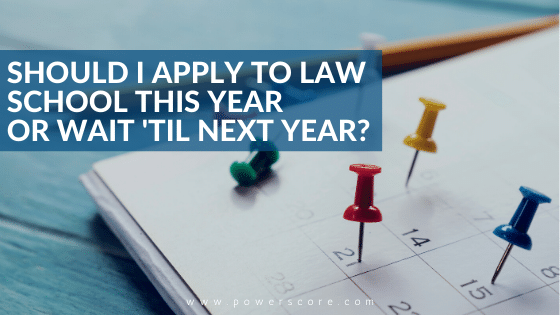 For many students, these first two months of the year are filled with preparation, questions, and doubts. Chief among them is this: What’s better–to apply late in the admissions cycle (i.e., right around now), or to wait and apply right at the beginning of the next one (i.e., in September of this year, thus postponing law school for a year)?

Most students asking this question have similar sets of circumstances (they typically revolve around last-minute career decisions and/or the LSAT).

When we get this question from students, typically one of two things have happened:

There’s also hidden option #3: The student who has known for a while that they wanted to apply to law school, but has left everything (seriously everything: personal statements, LSAT, letters of recommendation, transcript requests, etc.) to the last minute, which means they are now scrambling to get it all done and are cutting it dangerously close to the wire.

For all three types of students, the ideal course of action is always the same one, although not often the one they want to hear. Wait until the next cycle. You are always–always–better off applying earlier. You are basically choosing to hamper your own application by applying this late. This suggestion results in a number of different panicked replies: “But my numbers are solid! I have a good chance, don’t I?” “But I don’t want to wait until next year!” “But what will I do in the meantime?”

Let’s go over why we suggest waiting a year if you’re applying this late in the game.

The Timing of Your Application

This is the beauty (and the curse) of rolling admissions: The early birds really do get the worm. Believe me, you’re not the only one who is considering submitting an application now. In fact, many schools will tell you that they receive the vast majority of their applications in the month or so before their deadline.

The problem is, schools have already been admitting people, many from the time applications became available back in September or October. By the time you submit your application in late January or February, there are not only fewer spots left in the incoming class, there are literally thousands more people clamoring for them. So your numbers, which may have looked awesome back in October when there were fewer people to compare you to, are now middle-of-the-road. Your essay, which would have been interesting and insightful three months ago, is now something the admissions committee has read a version of at least 10 times. Your extracurriculars, which would have shown leadership at the start of the cycle, are now trumped by that one kid who started his own business, or the girl with the three show dogs

Do You See a Pattern?

The longer you wait, the weaker your application gets–even if it’s strong. You’re competing against many more people, the admissions committee is tired, and you just don’t shine as much. It’s not your fault. It’s just how the cycle goes. Things always look better when they’re fresh and new; at this point in the cycle, there’s nothing new under the sun, no matter how hard you to try to differentiate.

NOTE: Of course, there will always be some people that always have the unique application or the incredibly strong credentials. The Olympic gold medalist. The son/daughter of royalty. The movie star. The person with the Ph.D., impeccable essay, 175+ LSAT, and 4.0+ GPA from a very prestigious undergrad institution. They stand out no matter what. But, unless you’re one of these fortunate few, you’ll blend in. And that’s the last thing you want your application to do.

The Money Tree is Almost Leafless

Schools will always tell you the same thing: Get your financial aid applications in early. This is because schools start handing out scholarship money around the same time they start handing out acceptances. The longer you wait, the less money there is. If you apply at the end of the cycle, your chances of getting money are slim. And if a scholarship or fellowship is what you’re counting on, you can count yourself out. Early apps = $$$

What Message Are You Sending?

Think about what you’re saying (or what schools may be hearing) if you apply late (even with good numbers). “Sure, I could have applied earlier, but I kinda left it all to the last minute.” How would you regard an applicant like that? Would you cut them slack, particularly when you have so many other candidates to choose from? Would or wouldn’t it detract from the good stuff in the application?

You don’t ever want to submit a rushed application. It’s a fact: the quicker you do something, the greater the chances are that it’ll have mistakes, oversights, and incongruencies. Personal statements will go out with the wrong name of the school, résumés will be drafted with the wrong employment dates or spelling errors, transcripts won’t make it in time, letters of recommendation will be lukewarm and generic, LSAT scores will not reflect your potential. This is not the worst-case scenario, either: This is what will most likely happen if you leave it all to the last minute. When you give yourself plenty of time, you also give yourself the chance to do your best work. Cram it all in at the end, and it will look crammed.

Assume the worst. You work your tail off to put together a solid application, apply late and, despite your best efforts, get rejected. In the event this doesn’t quash your hopes of attending law school, you’ll probably apply again next cycle. Here’s the problem with that, though: Schools keep applications. Yes, even from rejected applicants. Especially from rejected applicants. Do you know why they do this? Because they want to be able to compare your applications if you decide to apply again the following year.

They do this to see if anything has changed: Did you write a new personal statement? Did you get new letters of recommendation? Have you retaken the LSAT? Did you get a new job? And this means that you can’t apply with the same application you did last time (after all, the definition of insanity is doing the same thing over and over and expecting different results). This means that you have wasted all of your past application materials, and are competing against your previous application. You not only have to write new essays, overhaul your résumé, get new recommendations (if possible), and re-take the LSAT (and get a higher score, if you can), you also have to outdo your past self. Which can be hard, if you’ve already poured all you had into your past material.

You Deserve Your Dream School

There is plenty you can do in the meantime! The biggest worry for students considering delaying their applications is what they’ll do between the end of this cycle, and the start of the next. They see it as a vast expanse of nothing, where they’ll wither away and waste their potential. Nothing could be further from the truth.

For starters, they can retake the LSAT (and take their time studying for it, which can certainly result in a much better score). They can spend all summer working on their applications (therefore giving each essay weeks to take shape, instead of days, or–eep–hours). Students can strengthen their résumé (with volunteer work, law-related work, or new skills) and broaden their experiences (with travel, or academic pursuits). Sure, it may not be what you pictured yourself doing, but this time can actually be used to beef up your chances. Don’t see it as a delay, see it as an opportunity to increase your potential.

All that being said, for some, waiting may simply not be an option. They may not want to, or they may simply be unable to. To those applicants: Godspeed. Be aware of your odds, and put the best foot you can forward. But if you think that you might be able to improve your position at all if you only had more time, I encourage you to wait and apply next cycle.