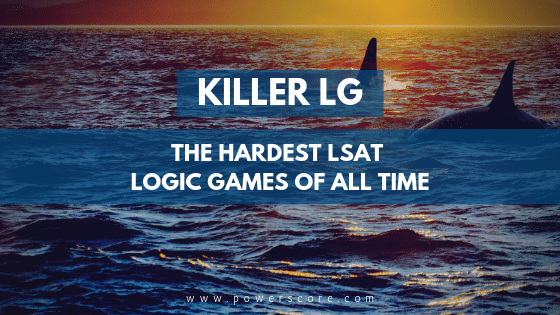 Why Review the Hardest Games?

The Logic Games section is inevitable. For many, it’s the toughest section of the test. If Logic Games are generally difficult, why then would we choose to write about the hardest games ever to appear? The short answer is that there are tremendous benefits to be gained by reviewing these games. If you understand how to recognize them and deal with them, you’ll perform better in this section. In our In Person, Live Online, and Advanced Logic Games courses, we devote lesson segments to discussing killer games. In the Advanced Course in particular, we dedicate a significant amount of discussing specific elements of these games. The goal in each is to help our students recognize that these games can be unusually challenging. If you can recognize that a game is difficult before spending too much time on it, there are undoubtedly benefits.

Want to try them all? We’ve compiled them into a Digital Practice Set.

On To The Games

So, with that in mind, let’s move on to the list of hardest LSAT games of all time, ordered chronologically. This publication identifier link will tell you where to find them.

Advanced Linear: Balanced. Not only was this game tough on its own merits, but it followed the Hannah game, leading to an unsavory double punch to end the October 1991 LSAT Games sections.

Advanced Linear: Unbalanced: Underfunded. This game contains a key inference that is extremely difficult to deduce during the setup.

Grouping: Defined-Fixed, Unbalanced: Overloaded. This unusual game features 7 jugglers for six spots, with those six spots divided by group and with order assigned. Lovely. And by lovely we mean terrible.

Grouping: Defined-Moving, Balanced, Identify the Templates. This game combines Grouping and Sequencing, forcing students to determine the sports played by each person, and then the ranking order of those players.

Grouping/Linear Combination, Numerical Distribution, Identify the Templates. This is a rough game, and even the Templates approach does not make the game much easier.

Grouping: Undefined. This game is often cited as the hardest game of all time. Ten CDs are candidates for a sale, and the rules are all multi-conditionals. The game is quite time-consuming (although not necessarily intrinsically difficult), and that time factor vaults it into the ranks of the hardest games ever.

Grouping: Defined-Moving, Unbalanced: Overloaded, Numerical Distribution. This game features a jeweler selecting six stones for six different rings. The distributions are open-ended, and there is a lot of information to juggle.

Grouping: Partially Defined. This game is about flight connections between five cities and the geographical element prompts many students to map this game out. There is an excellent, helpful map that can be drawn, but it is one that many students don’t see.

Grouping: Defined-Fixed, Unbalanced: Overloaded. This is one of the most widely despised games of recent times. Five dinosaurs are selected from a group of seven different dinosaurs. Then, to add to the fun, the dinosaurs are also different colors, such as mauve and yellow.

Grouping: Grouping: Partially Defined, Numerical Distribution. This is a rough game, and probably in the running for the second hardest game of all time. Very involved, and without the nice Grouping inference seen in the Dinosaurs game.

Grouping: Grouping: Partially Defined, Balanced, Numerical Distribution. This is a confusing game involving three numbered zones and then subzones designated for various urban use, such as for housing or retail. The difficulty comes from the fact that each zone can have multiple subzones of the same type, which opens this game up significantly at the outset.


Pattern. This is a strange game built upon employee preferences for offices, and the game begins with a list of each employee and their office preferences in order, followed by rules governing the selection of offices. Honestly, it’s not a place I would want to work.

Linear/Mapping. This is one of the most unusual games in LSAT history, and it stumped many excellent test takers. Identifying the entry point of the virus—the first computer infected—is critical and limits the possible outcomes. But many test takers struggled to create a diagram, making this game feel nearly impossible.


Pattern. The game centers on real estate companies that trade buildings with one another. The buildings are categorized as one of three classes, and each company owns a different mix of buildings. when you look over the last four games in this list, you begin to see that LSAC has a bias against offices and urban areas, and this game is just another way for them to beat that thought into test takers.


Grouping. Like the prior game on this list from PT80, June 2018’s final game was heavily numerical: the central step to success was recognizing the overlap principle at work in six corporations offering four 5-year bonds as well as four 10-year bonds…to reconcile that mismatch there must be two of the six that offer both, leading to three pairs of two (5-only, 10-only, and both). Tracking the open-ended nature of a rule like “offers 5-year bonds,” for example, as allowing that corporation to be either 5-only or 5-and-10 (both) made all the difference! But, unfortunately, this insight eludes the vast majority of students.

One final note about the list: by definition, any list such as this one is subjective, and what is difficult for one student may not be difficult for another. We left some games off the list because with the application of the right technique, an otherwise difficult game can become quite easy (June 2002, Game #3: Book Shelves game, for example). But, regardless of your personal view, the games above are ones that students generally regard as the toughest in LSAT history. If you really want to give yourself a workout, try taking any four of these games and doing them as a complete section. It’s a challenge!

Logic Games still leaving you puzzled? Consider hiring a tutor to help you on your journey to success.