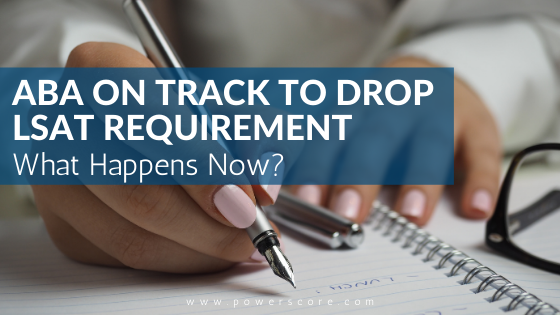 This article was co-written with Mike Spivey of Spivey Consulting.

On Friday, May 11th an ABA council approved a proposal that formally removes the requirement that the LSAT be used for admissions purposes at every ABA-approved law school. In its place is broader language that allows schools to skip using an admissions test entirely if they so choose.

No, but it’s very close. The next step is for the full ABA House of Delegates to review the changes in August. They can suggest further changes and send it back for revision, but at this point the issue has been debated enough that it’s likely this version—or something very similar—will be approved.

What are the implications for the upcoming cycle?

For the upcoming 2018/2019 cycle, not much. More schools will accept the GRE for admissions purposes, but things will stay fairly similar to how they are now. The LSAT will still be the preferred test, the only test accepted by every law school. That reality will last until law school admission offices become comfortable not only with the GRE, but with how GRE-only students perform as law students.

This is especially true as the ABA has recently placed a stronger emphasis on Standard 501, including heightened tracking of admitted student credentials with outcomes. If you’re applying this coming year or next, expect things to be about the same as they are currently. If the ABA language is not formally adopted until later than August, it could be at least another year before the GRE explodes on the law school scene.

What are the implications for future cycles?

Assuming the ABA does ditch Standard 503 (or amends it to allow for any test or no test at all) there still will be a bit of a pause. Once law schools become comfortable with the GRE and can assess how good of a predictor it is for law school performance, they will begin to depend on it more and more. At that point, the number of students admitted who don’t have an LSAT score will begin to rise. Eventually we should see about equal numbers of GRE and LSAT takers. Quite possibly other tests will get into the act as well, such as the GMAT. Again though, this large-scale equalization won’t happen until a few admissions cycles out at the earliest.

Applicants won’t notice much change for the next couple of cycles except a slow progression of more schools accepting a GRE score.  Will schools be even bolder and accept only MAT/ACT/SAT or no scores at all? At this stage that seems very unlikely because of the need for sound admissions practices and the ABA’s eye on school outcomes. But five or more years from now anything might be game.

Will schools ditch the LSAT?

No, and certainly not anytime soon. The newly revised Standard 501. ADMISSIONS states that:

Likely almost all schools will continue to use an admissions test. Since the LSAT is one they know well, they will keep it in the lineup. As a point of reference, a similar situation occurred in the business school space when schools started taking the GRE in addition to the GMAT. At first the number of GMAT takers dropped, but eventually it started rising again. I think we’ll see a bigger relative drop of LSAT takers. Why? It’s less similar to the GRE than the GMAT was. Ultimately, it will stabilize, especially since there will always be students turned off by the math on the GRE.

Why are people talking about the GMAT all of a sudden?

It’s the next logical choice for test expansion if they drop Standard 503, and a few joint-degree JD/MBA programs already accept the GMAT. But as things currently stand not a single law school accepts the GMAT for JD admissions. If someone is telling you to consider taking the GMAT for law school that is very bad advice.

Why is ABA heading in this direction?

The ABA is responding to law school concerns over diminished applicant numbers, and the use of other admissions tests—such as the GRE—is one proposed way to increase the applicant pool. The GRE is taken by more than 550,000 examinees worldwide, and thus accesses a far larger group of test takers than the LSAT, including many students in the STEM disciplines.

Still, on its face the abolition of the standardized test requirement is a bit peculiar. The ABA has been increasingly focused on tracking student outcomes (retention, bar passage and employment) with admissions inputs (GPA and LSAT score). The LSAT correlates more strongly with first year law school performance as well as bar passage.

This bears mention because while the ABA will likely completely do away with Standard 503, the assumption by law schools is equally likely to tip toward the fact that their admissions standards are still being tracked. Any remedial or existential threats from the ABA as they relate to admissions would need test scores to combat. Put in other terms, the schools that most need to increase their applicant pools will also face the most pressure to require a test as part of the application process.

How will U.S. News adapt to include new test scores?

If the business schools rankings—which use both the GRE and the GMAT—are any indication, they will weight the GRE and LSAT results equally. Indeed, the current discussion of their ranking methodology states exactly that:

This could of course change, but seems unlikely based on their past methodology. For law schools, how U.S. News ultimately handles GRE scores will have a big effect on the decisions made on candidates. With early indications that they will weigh the GRE and LSAT equally, the pressure to achieve a high GRE score will be equally intense. Thus the GRE won’t be a back door or easy pathway into law schools.

So which test should I take?

Our advice here hasn’t changed, nor will it likely for a few more cycles. We would recommend taking the LSAT because it is the only test every law school accepts. Note that if you have or receive an LSAT score, that score currently must be reported to USNWR, meaning it becomes the most important score for admissions purposes. The list of schools that take the GRE can be found here: US law schools that use the GRE.

Additionally, even schools that accept both the LSAT and GRE, the LSAT still carries the most psychological punch in admissions. Admissions officers are familiar with the LSAT. Admissions officers attend the annual LSAC conference each year. Change takes time to fully embrace, even for schools that are open to such change. Please don’t go studying for the DAT (Dental Aptitude Test) or OAT (Optometry Admissions Test ) just yet. The GRE makes sense for certain small groups—those that simply can’t do well on the LSAT or those that are taking the GRE for other programs. If you don’t fall into either category, the LSAT is still your best bet.